Mallinckrodt shorted by US investment group over Acthar drug 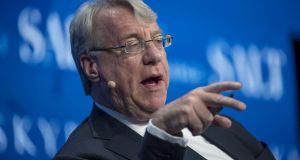 A “murky alliance” between the companies has led to “performance-enhancing drug prices” that may not be sustainable, Mr Chanos, the founder of Kynikos Associates, said in a presentation Thursday at the SkyBridge Alternatives Conference in Las Vegas.

“Growing scrutiny threatens both specialty drug manufacturers, such as Mallinckrodt, as well as [pharmacy benefit managers]” like Express Scripts, Mr Chanos said in the presentation.

About a third of Mallinckrodt’s sales last year came from HP Acthar Gel, a drug for autoimmune and rare diseases that has come under scrutiny for its high price and effectiveness.

Express Scripts drives the volume of Acthar sold through its patient assistance programmes and plays a role in reimbursement for the drug.

“Acthar is the epitome of excessive drug prices,” Mr Chanos said in the slide presentation at the conference, noting that the list price has increased “exponentially” to over $35,000 a vial from $40 in 2001.

In an interview with Bloomberg TV on Thursday, Mr Chanos said he expects Congress will call for a review of Mallinckrodt pricing at some point. Asked to put a value on the company, Mr Chanos said: “We think it is zero.”

Acthar is the most “egregiously” overpriced drug in the United States, he said, adding that he expects it will be replaced by generics in 10 years or that pricing will be lowered.

Mallinckrodt fell 3.5 per cent in New York trading. The shares have dropped 32 per cent in the year through May 17th. Express Scripts slid 0.8 per cent and is down 17 per cent in that period.

The Irish-headquartered drug company said Mr Chanos’ thesis was not based on fact and was misleading. Acthar makes a significant difference in the lives of thousands of very sick patients and while it’s a significant contributor to the company’s overall profitability, it is substantially less than the asserted estimates, the company said.

“We remain very confident in our business model and the value we bring to our clients and patients,” said Brian Henry, an Express Scripts spokesman. Mr Henry said that he disagreed with Mr Chanos on several points, including details of the company’s patient-assistance programme and how Express Scripts uses limitations on reimbursement for the drug through a prior authorization program.

In making the Mallinckrodt call, Mr Chanos joins Citron Research’s Andrew Left and Greenlight Capital’s David Einhorn, each of whom has said they have bet against the company.

Mallinckrodt has come under fire from investors and regulators after agreeing to acquire Questcor Pharmaceuticals, which owned the rights to the drug Acthar, in 2014.

The Federal Trade Commission alleged that Questcor illegally boosted the price of the drug by 85,000 per cent and purchased the rights to a cheaper competitor to keep it out of the US market.

In January, Mallinckrodt agreed to pay $100 million and license the drug, which had been sold for less outside the US, for two indications in order to settle the suit.

Express Scripts is in a conflict with one of its biggest customers, health insurer Anthem. Anthem sued the company last year, accusing it of $3 billion in annual overcharges. Express Scripts has said that it will likely lose business after the companies’ contract expires in 2019.

Mr Left has been critical of Mallinckrodt and Express Scripts.

In a January report, his Citron Research called Express Scripts “the John Gotti of the pharmaceutical industry”, saying the company extracts more profits in rebates and price concessions than its peers.

Mr Chanos was also in line with Mr Left on a bet against Valeant Pharmaceuticals International, which drained $4 billion from investor Bill Ackman’s portfolio.

In other comments, Mr Chanos made at the conference, he said hedge fund fees “are still too high” and that the US House of Representatives ’s healthcare bill rolling back Obamacare is “horrible” and will leave many poor people without coverage.