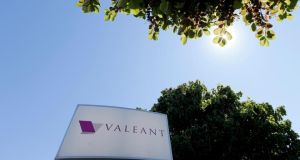 Valeant said adjusted earnings before interest, taxes, depreciation and amortisation this year will be $3.6 billion to $3.75 billion. Photograph: Christinne Muschi/Reuters

Valeant Pharmaceuticals International said it is making progress selling assets and is bringing in more cash, helping chip away at its debt and allowing it to boost its full-year forecast.

The forecast increase is a welcome sign for investors amid declining sales, legal troubles and a still-high debt burden, and the drugmaker’s stock gained 16 per cent to $11.23 in early trading in New York. The shares have lost more than 90 per cent of their value since an August 2015 peak.

Valeant said adjusted earnings before interest, taxes, depreciation and amortisation this year will be $3.6 billion to $3.75 billion (€3.3 billion to €3.45 billion), an increase from the $3.55 billion to $3.7 billion the company projected in February. The new projection includes the one-time sale of several businesses, and excludes the pending divestiture of prostate cancer unit Dendreon, Valeant said in a statement. Some analysts had expected a cut to guidance.

Chief executive Joe Papa has promised to get the company back on stable footing after two tumultuous years. Much of Papa’s focus is on boosting cash flows and paying down some of the $30 billion in debt Valeant took on amid an acquisition spree that made the company into what it is today. Its biggest repayment deadline comes in 2020, when $5.81 billion in maturities come due, with another $10.51 billion in the subsequent two years.

“I’ve heard chatter in the markets that Valeant doesn’t have the ability to repay all of its debt,” chief financial officer Paul Herendeen said on a call discussing first-quarter results. “Let me respond. We can meet all of our financial obligations to a combination of cash generation from our business, asset sales and importantly refinancings.”

The goal isn’t to get Valeant debt-free, but to “maintain a credit profile that will enable us to access the capital markets when necessary,” Herendeen said. “If we take care of our debt, and we will, our equity will take care of itself.”

Valeant’s most-actively traded bond, $3.25 billion of 6.125 per cent coupon debt due in 2025 gained 2.25 cents to 78.25 cents on the dollar in early trading in New York, according to Trace, the bond price reporting system of the US financial industry regulatory authority. That’s its biggest gain since November.

At the same time, Valeant’s drug business continues to deteriorate, and the company’s total first-quarter revenue was $2.11 billion, down 11 per cent from a year earlier. The decline was due to a lower volume of sales from its US diversified products and branded drug divisions, as well as the loss of patents for some of its drugs, the company said.

Valeant has faced pushback from the health insurers and pharmacy benefit managers that control prescription drug payments for many patients, and Valeant’s brand drug division sales were down 10 per cent.