US looking at ways to bring manufacturing back to America, president warns

The US president Donald Trump declared a state of emergency as the number of cases of coronavirus continued to rise in the United States but was previously criticised for tackling of the public health emergency. Video: The White House/As credited. 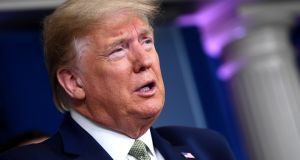 Donald Trump: “Ireland does a lot of work for us you know that in that world, in the pharma world. A very tremendous producer, and we are looking to bring a lot more back home.”

US president Donald Trump has said that ways to bring the production of pharmaceutical and medical devices back to America is being looked at – a move that could hit a key Irish industry.

Speaking at a press conference in the White House, Mr Trump said America is “looking for some alternatives” following suggestions from several members of Congress, including Florida senator Marco Rubio, that he sign an executive order ensuring that raw materials for pharmaceuticals and medical devices are made in the United States because of the coronavirus.

“We’re looking for some alternatives, yes,” Mr Trump said. “Ireland does a lot of work for us you know that in that world, in the pharma world. A very tremendous producer, and we are looking to bring a lot more back home. I’ve been talking about this for many years. . .long before I decided to run for president . . .we have to be able to take care of our country.”

Mr Trump was speaking as his administration considers economic measures to combat the coronavirus. The White House is seeking a package of up to $850 billion as it negotiates a deal with Congress.

Mr Trump also said he is considering sending cheques to Americans “in the next two weeks,” as the White House ramped up its response to the economic consequences of the coronavirus outbreak.

Speaking in the White House, Mr Trump said the response was “going to be big, and it’s going to be bold,” amid growing fears the US economy could enter recession due to the coronavirus crisis.

Treasury secretary Steve Mnuchin announced that Americans will not have to file their taxes by April 15th, the annual deadline, though he added: “we encourage those Americans who can file their taxes to file those taxes by April 15th”. US stock markets have suffered their biggest losses in 30 years, as the coronavirus begins to shut down businesses across the United States.

Markets suffered their worst day since 1987 on Monday as the coronavirus continued to cause havoc on Wall Street. The S & P dropped by 8 per cent within a minute of markets opening. Trading was then halted for 15 minutes as the emergency “circuit breaker” was triggered – a precautionary measure that kicks in when stocks drop below a certain level.

The market turbulence took place despite a dramatic intervention by the Federal Reserve on Sunday evening. In addition to cutting its benchmark interest rate to close to zero, it also committed to purchasing $500 billion of treasuries and $200 billion of mortgage backed securities.

All indices ended deep in negative territory. The S & P fell 12 per cent by the close of markets, while the Dow Jones was down almost 13 per cent.

In particular there are growing indications that the airline industry could receive some kind of rescue package from the government as carriers cut flights and capacity. The industry body representing airlines in the US said it is seeking a package of more than $50 billion. Mr Trump said the airline industry would be backstopped.

Mr Mnuchin aid he had spoken with all the airline chief executives this week.

“This is worse than 9/11.For the airline industry they are almost ground to a halt.”