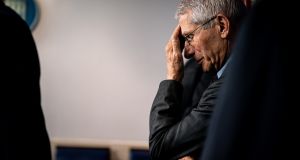 At a White House briefing on coronavirus on March 20th, President Donald Trump called the state department the “Deep State Department”. Behind him, Dr Anthony Fauci, the director of the National Institute of Allergy and Infectious Diseases, dropped his head and rubbed his forehead.

Some thought Fauci was slighting the president, leading to a vitriolic online reaction. On Twitter and Facebook, a post that falsely claimed he was part of a secret cabal who opposed Trump was soon shared thousands of times, reaching roughly 1.5 million people.

A week later, Fauci – the administration’s most outspoken advocate of emergency measures to fight the coronavirus outbreak – has become the target of an online conspiracy theory that he is mobilising to undermine the president.

That fanciful claim has spread across social media, fanned by a right-wing chorus of Trump’s supporters, even as Fauci has won a public following for his willingness to contradict the president and correct falsehoods and overly rosy pronouncements about containing the virus.

An analysis by the New York Times found more than 70 accounts on Twitter that have promoted the hashtag #FauciFraud, with some tweeting as frequently as 795 times a day. The anti-Fauci sentiment is being reinforced by posts from Tom Fitton, the president of Judicial Watch, a conservative group; Bill Mitchell, host of far-right online talk show YourVoice America; and other outspoken Trump supporters such as Shiva Ayyadurai, who has falsely claimed to be the inventor of email.

Many of the anti-Fauci posts, some of which pointed to a seven-year-old email that the doctor had sent praising Hillary Clinton when she was secretary of state, have been retweeted thousands of times. On YouTube, conspiracy-theory videos about Fauci have racked up hundreds of thousands of views in the past week. In private Facebook groups, posts disparaging him have also been shared hundreds of times and liked by thousands of people, according to the Times analysis.

One anti-Fauci tweet Tuesday said, “Sorry liberals but we don’t trust Dr. Anthony Fauci.” The torrent of falsehoods aimed at discrediting Fauci is another example of the hyperpartisan information flow that has driven a wedge into the way Americans think.

For the past few years, far-right supporters of Trump have regularly vilified those whom they see as opposing him. Even so, the campaign against Fauci stands out because he is one of the world’s leading infectious disease experts and a member of Trump’s virus task force, and it is unfolding as the government battles a pathogen that is rapidly spreading in the United States.

It is the latest twist in the ebb and flow of right-wing punditry that for weeks echoed Trump in minimising the threat posed by coronavirus and arguably undercut efforts to alert the public of its dangers. When the president took a more assertive posture against the outbreak, conservative outlets shifted, too – but now accuse Democrats and journalists of trying to use the pandemic to damage Trump politically.

“There seems to be a concerted effort on the part of Trump supporters to spread misinformation about the virus aggressively,” said Carl Bergstrom, a professor of biology at the University of Washington who has studied misinformation.

Adding that Fauci is bearing the brunt of the attacks, Bergstrom said: “There is this sense that experts are untrustworthy, and have agendas that aren’t aligned with the people. It’s very concerning because the experts in this are being discounted out of hand.”

The Trump administration has previously shown a distaste for relying on scientific expertise, such as when dealing with climate change. But misinformation campaigns during a pandemic carry a unique danger because they may sow distrust in public health officials when accurate information and advice are crucial, said Whitney Phillips, an assistant professor at Syracuse University who teaches digital ethics.

“What this case will show is that conspiracy theories can kill,” she said.

The National Institute of Allergy and Infectious Diseases did not respond to a request for comment on the misinformation being directed at Fauci, who has said he plans to keep working to contain the coronavirus.

His gesture – some called it a face palm – caught the attention of Trump’s supporters online, who saw it as an insult to the president

“When you’re dealing with the White House, sometimes you have to say things one, two, three, four times, and then it happens,” Fauci said in an interview with Science magazine last week. “So, I’m going to keep pushing.”

The online campaign is an abrupt shift for Fauci, an immunologist who has led the institute since 1984. He has long been seen as credible by a large section of the public and journalists, advising every president since Ronald Reagan and encouraging action against the Aids epidemic in the 1980s.

In recent weeks, much of the online discussion of Fauci was benign or positive. Zignal Labs, a media analysis company, studied 1.7 million mentions of Fauci across the web and TV broadcasts from February 27th to Friday and found that through mid-March, he was mainly praised and his comments were straightforwardly reported. Right-wing figures quoted Fauci approvingly or lauded him for his comments on shutting down travel to and from China, Zignal Labs said.

In the White House briefings on coronavirus, he often spoke plainly of the severity of the situation, becoming something of a folk hero to some on the left. Then Fauci, who had been a steady presence at Trump’s side during the briefings, did not appear at the one March 18th.

A hashtag asking “Where is Dr Fauci?” began trending on Twitter. Several Facebook fan groups dedicated to praising his medical record called for his return. The first accounts tweeting #FauciFraud also appeared, although their volume of posts was small, according to the Times analysis.

Two days later, Fauci put his head in his hand at the White House briefing after Trump’s remark on the “Deep State Department.” His gesture – some called it a face palm – caught the attention of Trump’s supporters online, who saw it as an insult to the president.

Anti-Fauci posts spiked, according to Zignal Labs. Much of the increase was prompted by a March 21st article in The American Thinker, a conservative blog, which published the seven-year-old email that Fauci had written to an aide of Clinton.

In the email, Fauci praised Clinton for her stamina during the 2013 Benghazi hearings. The American Thinker falsely claimed that the email was evidence that he was part of a secret group who opposed Trump.

That same day, Fitton of Judicial Watch posted a tweet linking to a different blog post that showed Fauci’s email on Clinton. In the tweet, Fitton included a video of himself crossing his arms and saying, “Isn’t that interesting.” It was retweeted more than 1,500 times.

In an interview, Fitton said, “Dr. Fauci is doing a great job.” He added that Fauci “wrote very political statements to Hillary Clinton that were odd for an appointee of his nature to send”.

The conspiracy theory was soon shared thousands of times across Facebook and Twitter. It was also taken up by messaging groups on WhatsApp and Facebook run by QAnon, the anonymous group that claims to be privy to government secrets. On YouTube, far-right personalities began spouting that Fauci was a fraud.