Lawsuits in US claim company profited from country’s opioid epidemic 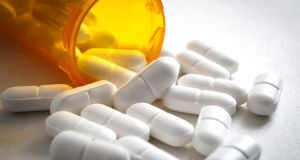 The New York-listed group has become the third major opioid maker to seek court protection from its creditors. Photograph: iStock

Drugmaker Mallinckrodt, which is headquartered in Ireland for tax reasons, filed for bankruptcy protection in the US on Monday as it seeks to deal with lawsuits claiming it profited from the country’s opioid epidemic.

The New York-listed group, whose executives are based in the UK, has become the third major opioid maker to seek court protection from its creditors. The company said its move came after it reached a broad consensus with creditors on a debt restructuring, which will it push ahead with a $1.6 billion (€1.35 billion) plan to resolve all opioid litigation.

The filing also will help resolve a US government investigation into whether the company defrauded Medicaid, a federal medical costs programme, through price hikes for its blockbuster multiple-sclerosis drug Acthar Gel. The company has agreed a settlement to pay $260 million (€220 million) to the government over seven years.

The opioid resolution agreement was reached with state attorneys general and lawyers for cities and counties suing to recoup billions in tax dollars spent on the fallout from addictions. Under the plan, Mallinckrodt will set up a trust to oversee payments and hand over warrants for nearly 20 per cent of the company’s shares, the company said.

More than 3,000 lawsuits have been filed accusing drug manufacturers of engaging in deceptive marketing that promoted the use of addictive painkillers, fuelling an epidemic that has resulted in more than 450,000 overdose deaths since 1999.

The company had in February said it planned to have its generic drug business file for bankruptcy as part of a tentative $1.6 billion (€1.35 billion) opioid settlement to resolve claims by state attorneys general and US cities and counties.

Mallinckrodt subsequently said two months ago the parent company and other units may also seek bankruptcy protection, after a judge allowed the federal government to force it to pay higher rebates to Medicaid programmes for its Acthar Gel.

Mallinckrodt, founded in St Louis, Missouri, in 1867, has had a presence in Ireland for more than 20 years, but its ownership and business in the State has changed dramatically since then.

The company was acquired in 2000 by then-Bermuda-based manufacturing and services conglomerate Tyco International, which seven years later separated its healthcare business from the group as an independent company, called Covidien, which was domiciled in Ireland.

Covidien, in turn, spun off Mallinckrodt as a New York Stock Exchange-listed, but Irish-incorporated, company in 2013. Covidien was acquired by Medtronic, the world’s second-largest medical devices maker in 2014 for almost $43 billion (€36.4 billion) in a “corporate inversion” that saw Medtronic move its domicile to Ireland.

Mallinckrodt employs 120 people in its facility in Blanchardstown in west Dublin, working in areas including research and development, manufacturing, supply chain management and other support functions.

“All of our businesses are continuing to operate as normal and we don’t anticipate any changes as a result of this process for our employees, customers, vendors or other partner,” a spokesman said.

Mallinckrodt said in its co-called chapter 11 bankruptcy filing that its liabilities and assets each lie within the $1 billion (€850 million) to $10 billion (€8.4 billion) range.

The debt restructuring plan will allow the company to shed as much as $1.3 billion (€1.1 billion) in debt.

Mallinckrodt is set to become the third drugmaker to use the bankruptcy process in an effort to settle liabilities stemming from addiction. Purdue Pharma and Insys Therapeutics took similar routes.