HSE could save €200m a year with off-patent drugs – report 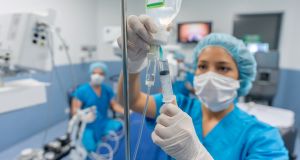 The health service could save up to €1 billion in its medicines budget over the next five years, according to the group representing the sector. Photograph: Getty

The health service could save up to €1 billion in its medicines budget over the next five years through increased use of generic and biosimilar products, according to the group representing the sector.

Medicines for Ireland says that the use of generics and biosimilars has saved the State €1.6 billion since 2013. and it argues that increased use of such drugs could save an average of €200 million a year on the HSE ’s €2.3 billion budget for medicines by 2026.

“These projections are on the conservative end of the spectrum and further savings are achievable if there are higher targets set for uptake in generics and biosimilar medicines,” according to a report, Reductions in the Cost of Medicines, from the group that represents makers of generic and biosimilar drugs.

The assertion comes against a background of the last government rejecting a plea by the HSE board in February for up to €20 million in special funds for newly available drugs and medicines this year. At the time the Department of Health told the HSE board that no additional money was available.

The savings suggested by Medicines for Ireland in its report amount to 10 times this figure.

“Failure to address the high cost of medicines with more sustainable generic or biosimilar options will ensure that funding constraints remain a millstone around the neck of an already overstretched healthcare system,” said Medicines for Ireland chairman David Delaney. “The current penetration rate for biosimilars medicine in Ireland is below 50 per cent, while the average across other EU countries is in the range of 80-90 per cent, demonstrating the immense opportunity for further savings in this area.”

Generics are copies of medicines that are no longer protected by patents. As a result, they are available at much cheaper prices. Biosimilars act in much the same way in the more modern and very expensive biologics market. Although it is impossible to precisely replicate a biologic medicine, biosimilars must also be approved by pharma regulators and must show no clinically meaningful difference to the off-patent biologic it imitates.

The Irish Pharmacy Union said this week that greater use of biosimilar drugs was “one of the most effective cost savings the Government could implement”.

Failure to implement a policy in this area had resulted in more than €300 million in “needless additional spending” over recent years, it added.

Medicines for Ireland said increased expenditure from the Covid-19 pandemic was placing even greater pressure on the resources of the HSE, “therefore measures to help reduce the cost of medicines and increase access to medicines for patients, need to be prioritised”.

For comparison, it states that €200 million in annual savings could deliver 6,000 additional nurses or 3,500 extra nursing home beds for the HSE.

However, there would be strong pressure from the pharmaceutical industry to direct any savings towards funding for new and more innovative patented medicines that are currently struggling to secure approval because of the budget shortfalls.

The pharma sector is gearing up for negotiations with the Government over a new multi-year supply and pricing agreement for medicines.

“The policy proposals set out in this report outline the opportunity for government to free up significant HSE resources by avoiding an annual spend of hundreds of millions of euro on high-cost patented medicines,” he said.