Irish company LetsGetChecked gets on board with American Airlines 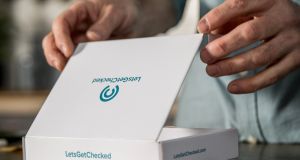 LetsGetChecked has provided more than 745,300 home tests during the past five years, with over 25,000 infections and diseases detected

The airline is to begin offering a new testing service for travel from Dallas-Fort Worth to Hawaii which, if deemed successful, will be rolled out to other destinations.

The initiative is part of a broader programme that sees the carrier collaborating with several foreign governments to help reopen markets to tourism.

LetsGetChecked has been chosen by the airline to provide pre-flight testing at home that is observed by a medical professional online and which offers results in 48 hours on average. Testing must be completed by passengers within 72 hours of a flight, with travellers who test negative exempt from the state’s 14-day quarantine.

The same programme also allows passengers to avail of in-person testing and onsite rapid testing at the airport through a company called CareNow.

LetsGetChecked began selling its Covid-19 test directly to consumers in the US in May after receiving “emergency use” approval from the Food and Drug Administration (FDA).

The test uses a nasal swab and polymerase chain reaction (PCR) analysis in a laboratory to check for the presence of the virus.

LetsGetChecked raised $71 million (€60 million) in a funding round in May to support its move into Covid testing. The company, which has almost 250 employees and operates in Dublin and New York, has a two-part test for coronavirus, with a blood test it says will give immediate results about an active infection, and a lab test that will confirm the results within 24 hours. The cost per test is $119.

Founded in 2015 by Peter Foley, LetsGetChecked has provided more than 745,300 home tests during the past five years, with over 25,000 infections and diseases detected.

The company began with sexual health tests, but its current list of tests includes men and women’s health and diagnostics for vitamin levels, thyroid function and cortisol levels.

American Airlines said it has also reached agreement with Jamaica to launch an initial testing programme at Miami International Airport and has a similar deal with the Bahamas.

In addition, the airline is in discussion with Caricom, a grouping of 20 Caribbean countries, about extending the pre-flight testing programme to additional markets.

“Our plan for this initial phase of pre-flight testing reflects the ingenuity and care our team is putting into rebuilding confidence in air travel, and we view this as an important step in our work to accelerate an eventual recovery of demand,” said Robert Isom, president of American Airlines.