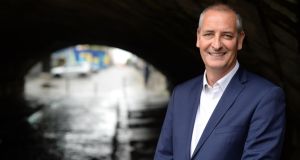 Paul Reid of Pfizer is taking over as head of industry body Ipha. Photograph: Dara Mac Dónaill / The Irish Times

“What we want to do is correct the innovation paradox...” It’s a bad start to an interview and a raised eyebrow persuades Paul Reid to explain the management-speak.

“It’s the contradiction we think that exists where Ireland is very good, if not excellent, at manufacturing new medicines but we’re very, very poor at making those new medicines available to Irish patients.”

This is, by a distance, the top item on the shopping list for Big Pharma in Ireland as they prepare to sit down with the Government and hammer out a new agreement on the supply and pricing of medicines in Ireland. And Reid will be the point man for the industry.

Country head of Pfizer, one of the biggest pharmaceutical companies worldwide and one with a major presence in Ireland, he is also the incoming president of the Irish Pharmaceutical Healthcare Association (Ipha), the industry body for Big Pharma at what could be a pivotal time for the industry.

In July, he notes, there were about 17 new medicines in a backlog, waiting for funding.

“The HSE, the health authority themselves, had recommended them for approval, so they had actually passed clinical effectiveness tests, value for money [tests] and were recommended for approval. But it was really a political decision that actually prevented them from being approved for reimbursement.

“So, effectively you had 17 new medicines, some of them manufactured in this country, not available to Irish patients but available in most of the rest of Europe.”

When Reid says it was a political decision, he means that no budget was made available for the new medicines.

It’s a sore point for the industry. When they agreed a four-year deal with the last government in 2016, the drug companies signed up to realign prices downwards each year in line with a “basket” of European countries. And this basket was widened to counter an accusation that it had previously been skewed only to those northern European countries with high drug prices.

They also agreed to cut prices for out-of-patent drugs by between 50 and 80 per cent when they faced competition in the Irish market.

Depending on whether you listened to the last government or the drug companies, the savings under the four-year deal would come to €600 million or €785 million. In the end, Reid says, they amounted to more than €700 million over the four years.

The clear understanding of the drug companies was that this would be used to fund new medicines. But this, they say, has not happened.

“I don’t think there’s any evidence to suggest that the savings that we generated as an industry through the agreement go back into new medicines,” Reid says. “It goes into the broader healthcare expenditure pot and how they use that money is certainly not for medicines.”

From the industry point of view, that €700 million of savings would have provided the headroom for most of the new drugs they were ready to offer in the Irish market.

In February this year, the HSE itself wrote to government seeking additional budget of up to €20 million to fund new treatments. The request was refused, effectively blocking access for those new drugs.

Part of the problem, they say, is that there is no ring-fenced medicines budget. The HSE is reported to be spending roughly €2.4 billion a year on drugs, a figure that has risen by single digit percentages over recent years, Ipha says.

The broken nature of the system is starkly illustrated by the example of Covid. Despite the blunt refusal of more funds back in February, three of the 17 logjammed medicines have since been granted funding as they are seen as useful in treating the pandemic.

No-one is arguing that it was a bad decision but, as with so many contentious decisions over drug approvals in recent years, it came down to a political decision. For both the health service and the industry, the lack of clear budget structure is a frustration.

In many ways, though, Covid has been good for the pharma sector, and not just because, as Ireland’s export figures show, demand for their medications has been booming.

Outside the circles of online conspiracy theories, the industry’s reaction to the pandemic has largely seen its reputation and trustworthiness improved. In part this has been down to a massive investment across the industry in developing diagnostics kits, treatments and vaccines. But is also illustrates the nature and cost of the pharmaceutical research and development.

Pfizer has been to the forefront of the race for a vaccine, pairing up with Germany’s BioNTech in an effort that has already seen the company invest $1 billion (€847 million) since last March.

That has seen the venture produce four vaccine candidates. Only one is chosen to put through Phase III trials, a process that involved 120 sites worldwide and up to 44,000 participants.

And Pfizer is not alone, with several competing vaccine candidates also at final stage trials and many others at earlier points in the curve. Even assuming several are effective, much of the billions invested will come to naught.

“That’s breakneck speed,” Reid says, referring to the progress over just six months. “It’s incredible stuff. And, as you say, there’s a number of other companies doing similar.”

Pfizer expects to produce a hundred million doses of its vaccine this year, and a further 1.3 billion doses in 2021. Ireland may have a role to play, with the company’s Grange Castle site in Dublin pitching for work as a quality testing site if the Pfizer/BioNTech vaccine wins approval.

But Reid warns that even if all goes to plan, it will be towards the back end of next year before we see widespread vaccinations in a number of European countries.

Long before then, Reid, and Ipha will be sitting down to negotiate a new agreement on price and supply of medicines. He hopes to sit down with the HSE and the Department of Health in November with the aim of having a deal concluded by the end of January.

Failure to do so could put valuable rebates enjoyed by the HSE – around 5 per cent across spending on medicines – and additional price reductions agreed as part of the four-month extension amounting to roughly €10 million-€12 million a year at risk.

“There’s no agreement beyond the end of January. So, none of that will exist when it comes to February 1st next year.

“We’ll want a very robust agreement if there’s to be a successor agreement, one that we can actually, you know, put in front of our members and be able to demonstrate that any savings given by this industry or efficiencies, that it’s going to help fund some of the new pipeline medicines that are coming through in the future.”

He accepts that many of these new medicines will be more expensive as they target niche patient populations with unmet medical need. Gene therapy is also looming and it, too, is expensive.

“They’re going to be transformational in terms of their clinical benefit, we hope. They’re going to mean that patients, for example, a haemophilia patient, instead of getting regular infusions, will now just potentially get one treatment,” Reid says. “And we have to work with the HSE and the department together on how we’re going to fund these.”

As it stands, Pfizer itself has around 90 products in its pipeline. With his Ipha hat, Reid believes that medicines securing regulatory approval next year alone will require a budget of about €50 million. With the €20 million price tag for those already stuck in the approval logjam, that’s €70 million next year alone.

“It’s no good looking at a budget and trying to understand how we’re going to fund medicines in the future if your goal is to keep it flat,he says. “There has to be a commitment from government to actually provide a budget line for funding growth in medicine expenditure over the next five years if you want to take a timeline.

“I think we’ve got to look at how they’re managing covid. Money can be found. I think there just has to be an appetite to do it and there has to be a reason to go and look a little bit harder. Because keeping it as it is and continue to think that efficiencies in the existing expenditure is going to fund the pipelines of the future is pretty short-sighted and it’s not going to happen. I think everyone knows that.”

The Pfizer boss says the industry is open to looking an new approaches to funding new drugs.

“One of the ways we can do it is through what we’re calling joint funding. So, the Exchequer are going to have to make a significant contribution to that €70 million but the industry can also make a contribution as well. There is also the possibility of co-investing in infrastructure that will help gather data to show the cost/benefit analysis of new therapies.

“That makes sense for the payer and makes sense for the company that actually is bringing the medicine to the market,” Reid says. “But you do need the data and we need an appetite to be shown by the industry and by the State to invest. It’s not going to happen otherwise.”

Reid argues that the failure of previous agreements to create space for new drugs is more than just a problem for the industry.

“Let’s not leave any doubt here. There is a decision variable there for investment which would include how attractive is the country environment from making new medicines available to the patients that need it,” he says.

“An investment decision will also be around the workforce capability, the skillset, the experience, it’ll be about intellectual property protection, it’ll be about tax. So, there’s a lot of considerations but one of the very clear considerations is how rewarding is the country environment to innovation in a general sense.”

One of the areas they hope to see movement on in next week’s Budget 2021 is in support of research and development.

“You see a lot of other jurisdictions, countries looking at making research more attractive for investment in their countries by offering credits. And I think Ireland again can’t take her eye off the ball there.”

Tax has always been a big pull for foreign direct investment but Reid recognises that change is coming.

“I hear Minister [Paschal] Donohoe and there will be change. That’s where I think it’s even more important that we have all the other variables in our favour. Because it can’t be just about tax.

“We need to maintain an attractive tax regimen here which we are, and I think the Government is committed to that. But we’ve a lot of strengths outside of just tax.

There’s clearly a lot on the table when the two sides meet but, at its heart, is the issue to which Reid and every other industry executive has stressed in recent years – access.

“There are innovative ways in terms of how we can help fund the new medicines that Irish patients frankly really should have access to as a developed economy and as an economy which is attracting the investment to manufacture these medicines.

“Every month’s delay has an impact on the net patent value of the medicine and that’s the calculation that affects investment. If we have delays across Europe, similar to what you have in Ireland, well you’ll have less money invested in R&D because it eats into patent licence. And it affects the overall balance.”