From April 12th, authorised bodies in UK will cease to be recognised by EU regulators 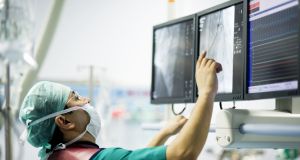 Medical devices including drug coated stents may not be available in the Republic if the UK crashes out of the EU. Photograph: iStock

As much as 40 per cent of medical devices used in the Republic will not be accessible in the event of a no-deal Brexit because authorised bodies in the UK won’t be recognised by EU regulators after April 12th, according to a leading global player in this space.

Between 30 and 40 per cent of Irish medical technology companies receive approval for medical devices from UK-based “notified bodies”. After the UK leaves the EU, those bodies won’t be authorised to approve devices for sale in the EU.

According to Cook Medical, a global medical technology company with a significant Limerick base, the restriction could “adversely affect patients’ treatment and quality of life”.

While the UK has said it will follow EU medtech regulations and recognise EU-approved devices after Brexit, the EU has not agreed to reciprocate.

This means devices including drug-coated stents, for example, may not be available until a resolution is found. Such a result would cause doctors to consider alternative procedures including open surgery, Cook said.

Under the existing system, each EU member state designates a notified body and then a manufacturer can use any notified body, but only one.

And because the EU is proceeding with a new medical device regulation, capacity in the system has been reduced. According to Cook Medical’s director of government and regulatory affairs across Europe, the Middle East and Africa, there’s a year-on-year reduction in the scope of products authorised.

“UK-notified bodies are such a significant player that there simply isn’t the capacity for them to transfer,” Emmett Devereux said.

“The ask here is that the European Commission and authorities recognise the UK-notified bodies,” Mr Devereux said.

He added that Cook Medical has begun stockpiling to ensure patients will get access to their products in the event the UK crashes out of the EU on April 12th without a deal.

While bigger players like Cook have been in a position to move around stock, given that the Limerick plant supplies 10 per cent of the company’s sales needs, smaller business will struggle, Mr Devereux added.

He noted that, given the backlog in European notified bodies, the process to switch to non-UK bodies could take up to a year.

“Although every industry will be affected by Brexit, in medtech, political inertia could really impact patient care. Many patients rely on medical devices approved for market in the UK,” he said.