Cancer drugs backed by HSE ‘on hold’ over funding shortfall 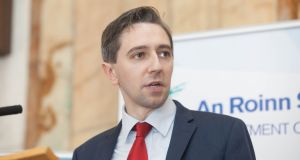 Minister for Health Simon Harris: he listed nine drugs in the Dáil that were awaiting decision and noted that extra Government funding had been found for two others – Orkambi/Kalydeco and Ibruntinib – since the introduction last year of a new agreement. Photograph: Gareth Chaney Collins

Five cancer drugs are awaiting Ministerial approval for introduction to the Irish market as the Government unveils its new €1 billion cancer strategy.

The HSE has backed the reimbursement of all five therapies but it does not have the resources within its current budget to pay for them. The medicines are among nine that have now been referred to the Department of Health.

It is up to Minister for Health Simon Harris to decide whether to seek support from Cabinet for extra budget resources to meet the costs of the drugs.

Details of the logjam in the department came in a written answer by the Minister to a parliamentary question from Sinn Féin TD Louise O’Reilly.

She sought details of medications that had been approved but were not available to purchase as a result of funding shortfalls, together with details of patient numbers involved and the illnesses the drugs were designed to treat.

Mr Harris listed nine drugs that were awaiting decision and noted that extra Government funding had been found for two others since the introduction last year of a new Framework Agreement on the Supply and Pricing of Medicines to the Health Services with the Irish drug manufacturers. These are the cystic fibrosis therapy Orkambi/Kalydeco and leukaemia drug Ibruntinib.

Also on the list are a treatment for depression, Brintellix, from a company called Lundbeck; Novartis’ heart drug Entresto; a treatment for Crohn’s disease and ulcerative colitis from Takeda called Entyvio; and Otezia, a Celgene medicine for psoriasis and psoriatic arthritis.

In his response to Ms O’Reilly, the Minister said the cumulative cost over five years for the nine drugs waiting for decision by his department would be €120 million.

Industry sources say that the drug approval process under the new agreement has effectively ground to a halt.

Ms O’Reilly said that it was very concerning that the list of unfunded drugs for people “in severe need” already included nine therapies just halfway through the year.

She said the response from the Minister “has shown that drugs have had to be put on hold”.

“It is quite concerning from the side of patient care that drugs for heart failure, ovarian cancer, Crohn’s, and depression which have been approved are now in limbo due to the absence of funding,” Ms O’Reilly said. “This is further evidence of significant levels of unmet need in the provision of health care.”

A spokesman for the Irish Pharmaceutical healthcare Association (Ipha), which represents pharma manufacturers, said: “The Ipha feels the reimbursement decisions should not rely on political decisions.”

The Ipha is known to be unhappy that, having delivered savings of close to €160 million in the first year of the new agreement, companies cannot get approval for the introduction of new medicines to the Irish market.