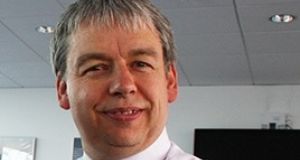 Tony McEnroe, chief executive of SiriusXT, a spin-out company from UCD, has been named as Enterprise Ireland’s high potential start-up founder of the year.

Mr McEnroe was presented with the inaugural award at a ceremony in Dublin on Wednesday evening.

SiriusXT has developed and built a bench-top, Soft X-Ray Microscope (SXT100) that is capable of generating high-resolution 3D images of the internal structure of whole biological cells.

The SXT100, the first commercial lab-scale SXT microscope of its kind, is built on soft x-ray source technology and has been exclusively licensed by the company.

SiriusXT, a spin-out from UCD’s school of physics, last year secured €3 million in a Horizon 2020 funding round.

The firm was one of nine start-up companies to be selected for the inaugural Award whereby each of the companies Liz Fulham of SalesOptimize and Eoin O’Broin of Solar AdTek were named as runners-up on the night.

As the overall winner, SiriusXT received a prize valued at €15,000 provided by Grant Thornton to further support the development of the company.

Mr McEnroe is a former EY Entrepreneur of the Year finalist from his time as managing director of Cork-based Farran Technology.