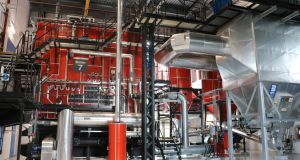 The investment has been used to develop a new purpose-built biomass energy facility which is expected to reduce the site’s carbon emissions by up to 33 per cent. The facility uses locally-sourced woodchips to create a carbon neutral fuel source for the site.

The development of the facility is part of GSK’s global sustainability strategy which aims to make the company carbon neutral by 2050. The company said its Dungarvan facility had significantly reduced its energy usage.

The biomass energy facility uses a sustainable fuel supply as the woodchip it burns is made from waste wood byproduct and the ash produced is used in fertiliser, which grows more trees.

Brian Fox, site director at GSK Dungarvan, said the investment was a “significant vote of confidence” in the facility, as well as in the capabilities of the town and people of Dungarvan.

“GSK is in Dungarvan 35 years this year and this investment will underpin our existing investments here and our sizeable workforce,” he said. “It will also significantly enhance Dungarvan’s role in GSK’s global business.”

Gerry Thornley: Ireland don’t want to box themselves into a corner
Vicky Phelan considers move to US for experimental drug trial