Washington turmoil is proving a bitter pill for Pfizer 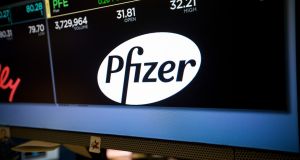 Pfizer last year failed in its attempt o buy Allergan and move its headquarters to the Republic. Photograph: Bloomberg

Since becoming chief executive of Pfizer in 2010, Ian Read has twice tried to reshape the drugmaker through a transformational acquisition. And twice he has been thwarted by politicians.

Now politics is getting in his way again.

Mr Read’s first brush with political interference came in 2014, when the British government was drawn into the company’s abortive £69.4 billion (€61.9 billion) takeover of AstraZeneca, the Anglo-Swedish drugmaker. Then last year the Obama administration torpedoed Pfizer’s attempt to buy Allergan for $160 billion, a deal that would have seen the combined group lower its US tax bill by relocating to the Republic, where it already employs 3,200 people.

This time round, Pfizer is being buffeted by a public outcry over high drug prices, and an unspecified threat from US president Donald Trump to bring costs down - as well as the White House’s failure to advance a quick overhaul of the US tax code.

Pharma executives had hoped that speedy tax reform would allow their companies - which generate a big chunk of profits overseas - to repatriate cash without having to hand 35 per cent of it to the Inland Revenue Service. Hundreds of billions of dollars of “trapped” money would be freed up to spend on acquisitions.

But the turmoil in Washington has held things up, and the impasse is hurting large drugmakers that need to buy new medicines to soften the blow from patent expiries on their best-selling products.

Some analysts believe Pfizer’s need is greater than that of rivals.

Andrew Baum, a Citi analyst, says the company “needs a deal to deliver” profits at the level expected by investors, and recently lowered his earnings estimates by between 5 and 10 per cent for the period between 2018 and 2022.

The impending expiry of patents protecting Viagra and Lyrica, two of the company’s top-selling drugs, is the main reason that Pfizer will probably attempt a large takeover, argues Jeffrey Holford, a Jefferies analyst. He says the company’s drug pipeline “seems insufficient” to cope with lost revenue from these products.

Frank D’Amelio, Pfizer’s chief financial officer, points out the company reaffirmed financial guidance for 2017 as recently as its last earnings call in May, adding: “If you look at our track record, we’ve delivered on or done better than our guidance to the street on our financial commitments.”

Like many others, Mr Baum and Mr Holford reckon that Bristol-Myers Squibb, a leader in the hot new field of cancer immunotherapy, is the most obvious takeover target for Pfizer, although some investors believe it would be unwise to make a move right now.

Bristol-Myers is trialling a new combination immunotherapy for lung cancer that is seen as crucial to its future success, with results not expected until next year. And Pfizer would probably have to bring back some of the cash it has parked overseas to help fund the deal, which would cost in excess of $100 billion.

On the company’s most recent earnings call, Mr Read appeared to acknowledge such hazards when he said “certain large companies have significant, almost binary, risks embedded within their business and pipelines”.

“They won’t have any strategic options left if they do buy Bristol-Myers,” says one life sciences investor with a large stake in Pfizer. “If the deal were to blow up, then it would be terrible, so I don’t know if they want to take the risk.”

“Plus, they need access to their offshore cash,” he added. “That part is very important.”

Mr Read had been working on the assumption that the tax code would be overhauled in the second half of this year, but now expects reform to happen some time next year, if at all, according to one person briefed on his thinking.

Another adviser played down the ultimate importance of reform, pointing out that Pfizer has made $40 billion of acquisitions in the past 18 months, all of them under the existing tax code.

Mr Read remains popular with investors, having delivered a total shareholder return of 141 per cent since he was named chief executive, comfortably outpacing drugmakers as a class, which have returned 115 per cent.

However, shareholders have started to ask questions about Mr Read’s most recent acquisition: last year’s $14 billion purchase of Medivation, the biotech group. Sales of the company’s much-vaunted prostate cancer drug, Xtandi, fell to $131 million in the first quarter, a decline of 11 per cent on the previous three months.

Pfizer attributed the decline to short-term difficulties at foundations that help retired patients afford their share or “co-pay” of the medicine, which is priced at roughly $130,000 per year.

Umer Raffat, analyst at Evercore ISI, says: “I think this Xtandi phenomenon . . . is a temporary issue, and it will pass.”

Not everyone agrees. Among the biggest factors in Citi’s recent downgrade was its sharply lower estimates for Xtandi sales, with analysts now expecting the drug to generate $700 million in revenue next year, versus their previous forecast for $1.2 billion.

The takeover of Medivation was a competitive process, according to people briefed on the deal, although one of the rival bidders, biotech group Gilead, has since told its investors it is now relieved it did not win the auction.

“Medivation was not a good deal and it has made people really scared,” says one investor with large holdings of Pfizer and Gilead. “Gilead was bidding, and now they’re like, ‘phew, thank God it wasn’t us’.”

Like other drugmakers, Pfizer is also having to contend with public pressure over the cost of medicines, although that did not stop the group from raising the list price of more than 90 drugs this month, taking the typical annual increase to 20 per cent.

Some investors interpreted the decision as a protective move to protect profits, but people familiar with the company’s strategy say it was long planned.

The company hoisted its prices even after many rivals, including AbbVie, Allergan, Sanofi and Novo Nordisk, pledged to limit increases amid popular anger and a pledge from Mr Trump to stop the industry “getting away with murder”.

“Everywhere else, prices have come in,” says one investor. “Pfizer is sticking out like a sore thumb.”