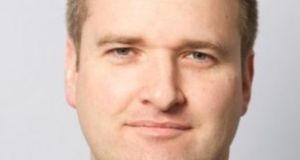 Radisens founder and chief executive Jerry O’Brien: “Our platform is deliberately low cost and easy to use”

Irish medtechcompany Radisens Diagnostics is set to raise €25 million in a funding round to bring its innovative diabetes management platform to market.

The Cork-based firm, which was established in 2009 by Jerry O’Brien, is behind a portable diagnostic platform to test for chronic diseases in primary care settings, such as GP clinics and outpatient centres

The company has previously raised over €11 million in development funding, research grants and equity investment from a number of private investors. Named backers include Enterprise Ireland and Kernel Capital.

Accountancy firm Moore Stephens is advising the company on the latest round. Funds raised will prepare the Radisens platform for pre-clinical trials required to take it through regulatory approval and market launch.

Diabetes is one of the biggest healthcare challenges globally, with an estimated 442 million adults worldwide, or one in 11, suffering from the condition. It is estimated that between 10 and 15 per cent of national healthcare budgets are spent managing diabetes, with the largest proportion of spending relating to hospital inpatient costs.

Regular monitoring in primary care clinics of those already diagnosed with diabetes has been shown to reduce healthcare costs and improve patient outcomes.

“Diabetes is no longer the disease of the elderly, it is one that affects us all and one which respects no borders.” said Mr O’Brien, Radisens’ chief executive.

“Our platform is deliberately low cost and easy to use. It tackles some of the major barriers to diabetes management in terms of shorter patient turnaround times, increased workflow efficiencies and improved patient experience.”

The company last year extended its partnership with the European Space Agency with the signing of a €1.6 million contract that sees it integrate multiple technologies required for human spaceflight onto a multi-mode device which allows for decentralised diagnostics.

“Our investors have been hugely supportive of us from the start. The new funding round is a natural progression that will help bring us to market, and while €25 million seems a lot it is actually quite small compared to the billions spent on managing diabetes worldwide,” said Mr O’Brien.

“We are very proud that we’ve established such a world class team in Cork, although our approach is one that is not usually seen in Ireland. We’ve very much taken a Silicon Valley model of starting off by looking at the big problems and then developing the technology to solve them, rather than starting with the tech and trying to crowbar in problems.”