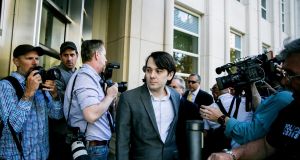 Martin Shkreli heads into federal court for the beginning of his trial for eight counts of securities and wire fraud Photograph: The New York Times

An odd duck. Weird. A guy who shuffled around his office in bunny slippers with a stethoscope around his neck because he felt comfortable that way. This is how Martin Shkreli was portrayed Wednesday for his trial on fraud charges - by Benjamin Brafman, his own lawyer.

“Is he strange? Yes,” Mr Brafman said of his client. But, he added, “Every single government witness will concur that Martin Shkreli, despite his flaws and his personality, is brilliant beyond words.”

In a captivating opening statement, the lawyer sought to alter a narrative that the government had laid out to the jury seated in US District Court in Brooklyn.

Mr Shkreli, 34, is best known for initiating a steep price increase on a lifesaving drug, and for his social-media antics that have drawn him enemies aplenty. He is being tried, however, on eight counts of securities and wire fraud related to his time running two hedge funds, MSMB Capital and MSMB Healthcare, and a pharmaceutical company he founded, Retrophin.

“The question is going to be whether the case is nuts: Nobody was defrauded, nobody lost any money,” Mr Brafman argued, telling the jury that the investors in fact made money because of Mr Shkreli’s financial prowess.

Prosecutor G Karthik Srinivasan said in his opening argument that Mr Shkreli had convinced investors that “he was a Wall Street genius.”

“In reality, he was just a con man,” Mr Srinivasan said.

After Mr Shkreli lost millions of dollars in a trade, draining the remaining money from MSMB Capital, a few days later he founded MSMB Healthcare, in early 2011, the prosecutor said. About the same time, he formed the pharmaceutical company Retrophin, and had MSMB Healthcare invest in Retrophin.

“The defendant was on both sides of the deal,” Mr Srinivasan said.

When his debt for the trading loss came due, “he stole money from MSMB Healthcare” to pay the debt, which the health care fund did not owe, Mr Srinivasan said. Mr Shkreli then told investors that he was shutting down the two funds, and told them they could have stock in Retrophin or cash for their shares.

Those who wanted cash could not get it and threatened to sue, Mr Srinivasan said, and that is when Mr Shkreli arranged for Retrophin to “pay off” the MSMB investors.

In his opening, Mr Brafman flipped the setup that Mr Srinivasan had constructed in trying to portray the investors and Retrophin board as victims and Mr Shkreli as a villain. Actually, Mr Brafman said, Mr Shkreli was pushed out of Retrophin because its board thought he did “not conform to their idea of what a public company CEO should look like or walk like or talk like,” he said. Retrophin, he said, is now quite valuable - its market capitalisation is more than $700 million (€613 million) - and the board is still “raping” Retrophin.

Chris Cline, a Retrophin spokesman, said: “The government has charged Mr Shkreli with defrauding Retrophin. We will let the facts speak for themselves in court.”

Some board members at Retrophin, many twice Mr Shkreli’s age, “bullied” and “frightened” Mr Shkreli, Mr Brafman said, and questioned his sexuality. “Whether Martin is gay or straight or bisexual is irrelevant; it’s 2017,” Mr Brafman said. “Get a life, board of Retrophin. The Retrophin board? A bunch of thugs.”

Meanwhile, the investors in Mr Shkreli’s funds were sophisticates with money to burn, Mr Brafman suggested. They are “crybabies” and high rollers, not people who needed money for rent or food, he told the jury, which is largely made up of working-class people, judging from the job descriptions given during jury selection. These investors, he said, knew investing in hedge funds generally, and this hedge fund particularly, was risky; they also made a lot of money with Mr Shkreli. One “inherited a hedge fund from her daddy” and invested that with Mr Shkreli. A “fabulously wealthy” couple was “on the dysfunctional spectrum” themselves, tried to “adopt” Mr Shkreli (not formally, Mr Brafman clarified) and gave him religious advice. One of the Retrophin board members, he said, “was flying to Mykonos or some other island and Martin Shkreli was like a hermit in his office” working away.

Once, after an investor encountered Mr Shkreli in the slippers-and-stethoscope get-up when he dropped by the office, the investor said, “But Martin, you’re not a doctor,” according to Mr Brafman. Mr Shkreli responded, “I’m comfortable this way,” the lawyer said.

“Maybe he’s just nuts, but that doesn’t make you guilty,” Mr Brafman said. As for the government’s specific assertions, Mr Brafman argued that some of the documents and arrangements in question were blessed by lawyers or board members, but allowed that Mr Shkreli sometimes played loose with facts.

“Martin is Martin,” he said. “He sometimes said some things to an investor on a certain date, but not everything he said was 100 per cent accurate, but he was truthful to the mission” of making Retrophin a success.

During the 2 1/2 days of jury selection this week, Mr Brafman often appeared exasperated. Hundreds of jurors were dismissed overall, most for vacation or work conflicts. Dozens, however, were excused for strong views of Mr Shkreli. On Wednesday alone, various potential jurors said, “I have no sympathy for a defendant like this,” calling him “unethical” and saying “just looking at him kind of twists my stomach.” A 20-something prospective juror referred to the one-of-a-kind album from the hip-hop group Wu-Tang Clan that Mr Shkreli bought, and said he was “probably guilty,” not to mention that “he disrespected the Wu-Tang Clan, so.”

Brafman also sometimes described his client in negative terms, telling jurors that “joining team Shkreli comes with a lot of aggravation.” Still Mr Shkreli, who had sat through the government’s statement often rolling his eyes and making faces, sat straight up, smiling, looking like he was watching a terrific movie when Mr Brafman ripped through his opening statement. When the lawyer returned to the defence table, Mr Shkreli stood, put his arm around him, and patted him on the shoulder.

“Buckle up your seat belts, ladies and gentleman; you’re in for a good ride,” Mr Brafman told the jury.