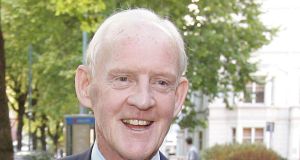 Businessman Larry Goodman is poised to take full ownership of the high-profile private hospitals the Blackrock Clinic and the Hermitage, following rulings by competition regulators.

Ownership of the Blackrock Clinic has been the subject of several court battles between Mr Goodman’s company Breccia, and Dr Joseph Sheehan, the clinic’s co-founder, and several years ago, with another investor, developer John Flynn.

The State’s Competition and Consumer Protection Commission (CCPC) said it would allow Portlon Trust, through subsidiaries, Parma Investments and Breccia, to buy shareholdings of Tullycorbett Ltd and Xroon Ltd in Blackrock Clinic.

The commission also gave the green light to Parma to buy Dr Sheehan’s shares from accountant Damien Murran of RSM Ireland, who was appointed receiver over the co-founder’s stake.

Both deals will give Portlon Trust, which Mr Goodman controls, full ownership of Blackrock, in which it already holds a stake.

Blackrock’s other remaining co-founder, medical consultant George Duffy, held his shares in the clinic through Tullycorbett and Xroon

Mr Goodman has clinched ownership of the Hermitage in Lucan, Co Dublin, after the commission approved a third deal to buy stakes held in the business by Mr Duffy and developer Sean Mulryan’s Ballymore Ireland Group.

The regulator’s approval means that Portlon, through Parma Investments, will take full control of Torcross Ltd, the Hermitage’s holding company.

None of the deals will “substantially lessen” competition in any market for goods and services in the Republic, according to statements from the CCPC confirming its approval for all three.

Mr Goodman is best known for his beef- and lamb-processing businesses. However, Portlon also has interests in energy and property. It owns a third private hospital, the Galway Cinic.

Blackrock is a 170-bedroom private hospital located in the Dublin suburb of the same name. It also has 12 intensive-care beds, nine operating theatres and three cardiology labs.

The Hermitage has 112 bedrooms, eight intensive-care beds and seven operating rooms. It provides in-patient, out-patient and daycare services. It also has pathology and lab testing.

Parma Investments said it welcomed the “decisions by the Competition and Consumer Protection Commission to clear its proposed acquisition of the remaining shareholdings in the Hermitage Clinic Ltd and Blackrock Hospital Ltd”.

All three transactions completing its takeover of the Blackrock and Hermitage clinics were notified to the CCPC in March. Irish competition law requires parties to notify the regulator of any deal where two of the businesses involved have turnovers of €10 million or more.

The regulator must establish that mergers or acquisitions will not damage competition before approving them.