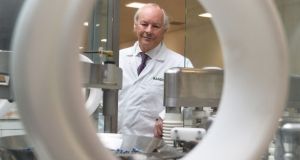 Randox, the Antrim diagnostics company, is to invest £30 million in a new Covid-19 testing lab in a move that will lead to the creation of 200 new jobs .

The company, which is conducting Covid-19 tests as part of the UK’s national testing programme, is to establish the new facilities at its existing headquarters in Crumlin, Co Antrim.

Randox said it was recruiting staff across science, engineering and manufacturing to support the programme.

The specialised laboratory, the development of which was fast-tracked over the space of four weeks, is the first step in a wider diagnostics investment programme from the company.

“An incredible amount of work has gone into making this cutting-edge testing facility a reality in a relatively short space of time, as we know that effective testing is the most effective way to both save lives and promote a timely return to a more normal society,” said managing director Dr Peter FitzGerald.

Randox Laboratories, which Dr FitzGerald established in 1982 in a converted henhouse at the back of his parents’ home, now employs more than 1,500 people globally.

The company was primarily a business-to-business company developing and manufacturing diagnostic tests for use by hospitals, clinics and veterinary laboratories. In recent years it has also moved into selling directly to consumers with its walk-in wellness clinics.

Dr FitzGerald is a former Irish Times Business Person of the Month and an EY Entrepreneur of the Year winner.