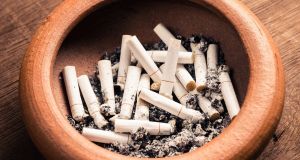 The Health Service Executive is investigating if some tobacco companies are breaching a recent ban on menthol cigarettes. Photograph: iStock

The Health Service Executive (HSE) is investigating if some tobacco companies are breaching a recent ban on menthol cigarettes to hold on to a slice of what was a €250 million market in the Republic.

The European Commission has also said it is awaiting correspondence from Simon Harris, the Minister for Health, after he accused some tobacco companies of “undermining” the ban that came into force across Europe last month.

Mr Harris had called for European Union intervention against cigarette manufacturers who exploit any loopholes in the new rules.

Major retailers, including Dunnes Stores, have also started to contact cigarette manufacturers asking for confirmation that the substitute products they introduced after the menthol ban are legal, after concerns were raised.

Retailers, who commit a criminal offence if they sell menthol-flavoured cigarettes, moved to seek reassurance after The Irish Times reported last month that certain tobacco companies are still targeting smokers with cigarettes that either still have some menthol added, or are advertised as “menthol blends”.

Japan Tobacco International (JTI), the maker of Silk Cut, wrote to retailers last week to confirm that the Choice Green variant of the brand still “contains low levels of menthol”. But it insists this is legal as long as the cigarettes do not smell or taste of any characterising flavour other than tobacco, which JTI claims is the case with Silk Cut Choice Green.

The company says it shared in advance the ingredients for its new menthol-added product with the relevant authorities in Ireland and the EU: “So there is full transparency throughout this process.”

Philip Morris, the maker of Marlboro, says it does not add menthol to any cigarettes. It has, however, launched a new green-themed brand called Marlboro Bright, which it sells as a “menthol blend without mentholation”. When asked if retailers had sought reassurance about legality, Philip Morris confirmed that it received letters from a “trade partner”.

“We will write again to all trade partners to confirm Marlboro Bright is a non-mentholated traditional cigarette,” it said.

Rival tobacco company, British American Tobacco, which trades here through its PJ Carroll subsidiary, did not introduce any replacement menthol product, after the ban affected the 18 per cent of the market here that was menthol cigarettes. Last week it wrote to the HSE’s Tobacco Control Office alleging breaches of the law by some rivals with substitute products.

“PJ Carroll conducted scientific analysis of a number of cigarette brands placed on the market by other companies after the menthol ban came into effect on May 20th. Our analysis shows that they do have menthol characteristics and qualities,” according to Simon Carroll, country manager of PJ Carroll.

“We firmly believe that both the letter and spirit of the law is clear. We have not launched any cigarette brands or accessories containing menthol.”

The HSE said last night it is “currently investigating these complaints and related matters” and it will co-operate with the European Commission.