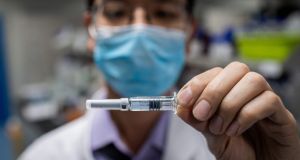 Open Orphan is also working on an antibody testing service that will have capacity for up to 3,000 tests per day. Photograph: Nicolas Asfouri/AFP

Challenge study models involve patients that are deliberately exposed to a disease – in this case to a form of the virus.

The company recently signed what it described as a “major” deal with an unnamed vaccine developer through its Venn Life Sciences unit.

The company has also announced that it is working on an antibody testing service that will have capacity for up to 3,000 tests per day, using its Quotient testing instruments, which the group says can offer 100 per cent accuracy.

Publishing its annual results for 2019, which showed it made a loss of €6.5 million, the pharma firm said the global pandemic had provided “unprecedented growth opportunities”.

“In recent decades, governments and pharma companies around the world completely underinvested in new vaccines and the onset of Covid-19 caught them significantly off-guard and as such there is a huge capital investment program under way around the world to roll out an extensive range of Covid-19 and importantly non-Covid-19 vaccines to ensure that the world is not caught unprepared in future pandemics,” he said.

Open Orphan, which recently acquired London-based hVivo, said a further €2.5 million of costs will be removed from the business in the first half of 2020. Annualised savings of €2 million in hVivo and €3 million in Venn have already been secured since the January merger.

The company said that fundraisings in January and May which together raised £17.9 million (€19.7 million) had increased liquidity and strengthened the balance sheet to “ leverage a broader service offering to an enlarged and combined customer base”.