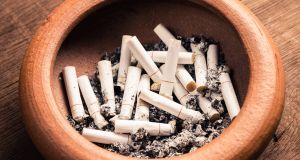 The HSE said it was investigating complaints after some brands appeared to be targeting the €250 million market for menthol smokers even after the ban.

Sales data circulated within the €1.8 billion Irish tobacco industry shows that the four replacement brands introduced by Japan Tobacco International (JTI) following May’s prohibition on menthol cigarettes had scooped up more than 5 per cent of the market by the middle of June.

The brands are among those now being scrutinised as part of an investigation into the industry by the Health Service Executive, which is examining whether tobacco companies have acted legally in relation to the menthol ban, which was introduced across the European Union and the UK on May 20th.

Following complaints that certain brands still appeared to be targeting the €250 million market for menthol smokers even after the ban, the HSE has said it is “currently investigating these complaints and related matters” and intends to liaise with the European Commission.

Silk Cut maker JTI insists that its new replacement brands are in full legal compliance with the ban, despite admitting it still uses some menthol flavourings during manufacturing.

JTI says this is legal as long as the cigarettes don’t taste or smell of anything other than tobacco. Former minister for health Simon Harris previously warned that he believed some companies were “undermining” the ban.

Internal industry data supplied to all manufacturers by retailers, and obtained by The Irish Times, show strong growth in the four main brands JTI introduced at around the time of the ban.

The brands were advertised to retailers by 30 per cent Japanese state-owned JTI as substitutes for their menthol brands, and hit shops a couple of weeks before the ban kicked in.

The most popular was Silk Cut Choice Green, with 1.77 per cent. JTI has acknowledged that it still adds some menthol to this particular brand in manufacturing, but insists this is legal. JTI’s overall share of the market has also risen.

Major tobacco companies that introduced substitute products have come under sustained pressure across Europe over attempts to circumvent the ban. There have been calls for investigations in the UK and Germany.

The last Fine Gael-led Government passed the issue over to HSE inspectors, although industry sources say they are not yet aware of companies being contacted by officials.

Meanwhile, Fine Gael TD Neale Richmond has raised the issue in the Dáil. Mr Harris, before he left office, said he would raise it at EU level, although the commission said it was still awaiting contact from the Government.

Marlboro maker Philip Morris last month said it made a “mistake” by running an advertisement in the trade press here for a “menthol blend”, Marlboro Bright, which it introduced in Ireland after discontinuing its old menthol cigarettes, Marlboro Green.

It said its new green-themed brand contains no menthol and is a legal “traditional cigarette”. It has repeatedly declined to clarify what “menthol blend” means.