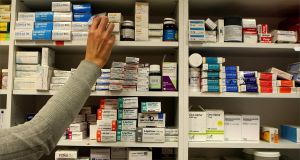 Patent protection rules that curb competition for medicines in markets outside the European Union should be changed, the European commission has proposed. Photograph: Julien Behal/PA Wire

Patent protection rules that curb competition for medicines in markets outside the European Union should be changed, the European commission has proposed.

The commission says it wants to introduce an “export manufacturing waiver” to protections fr the pharmaceuticals sector known as supplementary protection certificates (SPC).

An SPC is an EU-wide intellectual property right that extends the protection of a patented medicine by up to five years. SPCs effectively compensate patent holders for time lost in getting regulatory approval for medicines.

Under the current regulation, European-based manufacturers are prevented from producing medicines even for regions outside the EU during the period of an SPC, despite the fact that those markets may not be subject to a supplementary protection certificate or where it might already have expired.

Generics and biosimilar manufacturers, which produce “me too” versions of drugs that have come off patent, have been pressing for a number of years for a waiver covering European manufacture for such markets outside the EU.

The European Commission last year launched a public consultation on SPCs. The announcement Monday is the outcome of that process.

The Irish Pharmaceutical Healthcare Association, which represents drug companies that focus on R&D, said the proposed change “would be a setback for an industry centred on innovation when the focus should remain on creating the best conditions required for the discovery and delivery of new medicines and the attraction of fresh investments to Ireland”.

“Patients rely on industry innovation for the discovery and delivery of new medicines,” said Ipha chief executive Oliver O’Connor. “We must guard against any moves, including the proposed introduction of manufacturing waivers, that could weaken our ability to support the work of the originator companies in the biopharma sector.”

The Commission, which will require approval from the European Parliament and the Council of Ministers before its proposal becomes law, said the waiver will support Europe’s pioneering role in pharmaceutical research and development.

Elzbieta Bienkowska, the commissioner for internal market, industry, entrepreneurship and SMEs, said the proposal struck a balance between the imperative to ensure the attractiveness of Europe for innovative pharmaceutical companies and the urgency to allow EU based generics and biosimilar to compete on the global markets.

“This could generate €1 billion net additional sales per year and up to 25 000 new jobs over 10 years,” she said. “In the medium term, more competition will improve patients’ access to a wider choice of medicines and alleviate public budgets.”

Commission vice-president Jyrki Katainen, who is responsible for jobs, growth investment and competitiveness, said the Commission was committed to core IP rights and the length of patent protection, which remain unchanged.

“Today we are proposing a well-calibrated adjustment to the current regime to remove a legal barrier that was preventing our companies from competing on equal terms on global markets where competition is fierce. We want to make sure that our pharmaceutical industry reaps the benefits of such competition.”

Jacek Glinka, the European president of generics group Mylan and vice-president and treasurer of Medicines for Europe lobby that represents the sector, has called on the Government to back the introduction of a manufacturing waiver, saying such a move could boost employment opportunities, increase net sales to the EU pharma industry by €7.3 billion, and ensure faster entry to market for generic and biosimilar medicines.

On a visit to Dublin recently, he said Ireland was in a strong position to gain a significant number of new jobs following the introduction of a waiver.

“The current regime impedes the growth of additional pharmaceutical manufacturing in Europe and in particular in Ireland, which given its impressive track record in this area, would be in pole position to make investment gains,” he said.