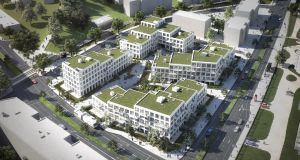 A computer-generated image of Hines’s planned apartment development in Cherrywood.

US bank Wells Fargo, the country’s third largest by market value, is backing the Cherrywood development in south Dublin with an almost €81 million credit facility.

The multinational bank has provided debt financing to real-estate group Hines and APG Asset Management, a Dutch pension investor, for the first stage of the three-phase build-to-rent development in the Cherrywood town centre.

“We have a long-standing history in Ireland, and we are excited to support the country’s growing build-to-rent sector,” said Stacey Flor of Wells Fargo. The credit facility is in line with the company’s strategy to support build-to-rent, an ever more popular method of delivering housing in the Republic, she added.

Build-to-rent developments are ones where a developer builds an entire apartment block or estate and sells it off to one buyer or rents all the units out. This method of providing housing has witnessed a recent growth spurt and trends indicate a growing preference from developers to build this type of housing.

When it’s finished, Cherrywood will comprise more than 7,700 new homes, six schools, retails units, parks and leisure facilities. With access to the Luas tram network, the area will eventually have a population of about 25,000 people. The total development cost for the project is about €450 million.

US-based Hines is the lead developer at Cherrywood and has spent two years putting in the infrastructure needed for the overall project.

Located southeast of Carrickmines and northwest of Shankill, Cherrywood was identified as Dublin’s newest suburb in 2010 and designated as a strategic development zone. Aside from Hines, Cairn Homes has a presence in the area while Johnny Ronan was last week named as preferred bidder for a major office and residential development in the area.

Mr Ronan’s main property development vehicle, Ronan Group Real Estate, is thought to have seen off competition from Balfour Beatty and Hines to secure the project, which is known as Town Centre Three.