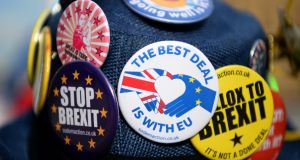 UK firms have set up EU hubs in locations such as Dublin because Brexit means the loss of their passporting. Photograph: PA Wire

Brexit could prompt an increase in market manipulation as surveillance becomes patchier in the wake of the City of London shifting business to the EU, the UK’s financial regulator has cautioned.

In one of its sternest warnings to date to the industry on insider trading, the Financial Conduct Authority told banks and investment funds to be far more sceptical of all employees who access confidential information, from the very top - where bosses privy to inside information mingle with senior investors and journalists – down to cleaning staff.

Brexit presents its own threat to the cleanliness of the market because City firms have had to move operations to locations such as Dublin the EU in a bid to retain access to the bloc, Julia Hoggett, the FCA’s director of market oversight said on Wednesday. Firms have had to set up EU hubs because Brexit means the loss of their so-called passporting, allowing firms to be based in one country and sell services seamlessly across the EU without the need for separate regulatory permission or ringfenced capital.

“Whilst activity may move, it is extremely important that the quality of controls remains robust,” Ms Hoggett said. “Firms must not have gaps in their oversight, and equally, must remain confident that they can still see the big picture of the behaviours they are facilitating - even across multiple borders.”

Her comments come 44 days before the UK is due to exit the EU. The FCA and its sister regulator, the Prudential Regulation Authority, have been quietly signing co-operation deals with watchdogs across the bloc so that they can still share information in the event of a no-deal Brexit.

Ms Hoggett’s speech detailed new concerns of the FCA around how markets could be manipulated by traders, including “following” - the opposite of front-running - where traders follow what they think will be profitable but suspicious client trades. She also highlighted the risks presented by cyber attacks to hack for confidential information, and also from algorithmic and high-frequency trading.

“The FCA cannot prosecute a computer, but we can seek to prosecute the people who provided the governance over that computer,” she said. – Copyright The Financial Times Limited 2019