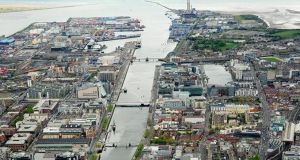 Lockton executives were in Dublin to meet officials for Brexit talks.

Lockton executives were in Dublin on Wednesday to meet officials, according to the sources. Deliberations are at an early stage, and no final decisions have been made, the people said.

Lockton, which has operated in Dublin since 1982, manages a middle market book of Irish clients in Dublin, as well as specialising in construction, technology and professional indemnity for lawyers, the Kansas-based company said on its website.

The Government is vying to win further finance jobs as London-based operations seek to keep a foothold in the European Union after the UK exits . Ireland is hoping to win a second pipeline of US financial firms that want to expand their Dublin operations by moving some elements of the business from London.

“Since the decision of the UK to leave the European Union, the contingency planning by international financial services firms has increased significantly given the uncertainty surrounding the eventual outcomes,” the finance ministry said, adding “it cannot comment on queries regarding individual firms for reasons including commercial sensitivity and confidentiality”.

Lockton didn’t immediately respond to a request for comment on the meeting.

“Lockton is working closely with industry bodies and government representatives and the business has developed a range of contingency plans to ensure it continues to be able to meet the needs of all clients and prospects that may be affected by the outcome of Brexit negotiations,” Ian Cooper, a Lockton partner, said in response to questions last week.

Lockton declined to comment any specific locations that may be under consideration.