Thomas Dundon left company in July 2015, a time of heightened tensions with regulators 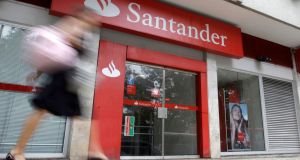 Santander has closed another chapter in the troubled history of its subprime auto-lending arm in the US, agreeing to pay its former chief executive more than $700 million in an exit deal over two years in the making.

In a regulatory filing the Madrid-based bank said it had come to an agreement with Thomas Dundon, who left Santander Consumer in July 2015, at a time of heightened tensions with regulators. Back then, the bank said it would pay him almost a billion dollars in severance and in compensation for his near-10 per cent stake in the Dallas-based subsidiary.

The bank has now agreed a slightly smaller exit package with Mr Dundon (46) who founded the company in 1995. He receives $942 million for his stock and $66 million in severance, down $50 million from the original deal.

Mr Dundon, in turn, has agreed to repay a $290 million loan to the company, plus interest of $5 million, bringing his net proceeds to $713 million, before taxes.

A spokesperson declined to comment on the reasons for the delay in finalising the terms of Mr Dundon’s payout, or the $50 million reduction from the original deal. She noted that the former chief executive and chairman had agreed to extend a commitment not to compete with, or hire anyone from, Santander Consumer until 2019.

Governance glitches in the US have long been a headache for Ana Botín, executive chairman of Santander, who vowed to get a better grip on the entire North American business after taking over the top job at Spain’s biggest bank from her late father in 2014.

In June last year, Santander Consumer’s parent, Santander Holdings USA, set an unenviable record by becoming the first bank to fail the stress test carried out by the Federal Reserve for a third year in a row.