Boris Johnson: UK and Ireland can strengthen ties via Brexit 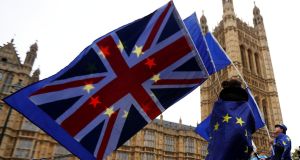 Do not believe anyone who says that by leaving the EU, the UK is turning its back on the world. The exact opposite is true.” Photograph: Peter Nicholls/Reuters

Of the 52 countries I have visited as foreign secretary, Ireland is more closely tied to Britain by kinship and history than just about any other. When I arrive in Dublin today, those special bonds will be at the front of my mind.

Almost a million of our respective citizens live in one another’s countries: there are 250,000 Britons in Ireland and 700,000 Irish nationals in the United Kingdom. Ireland is the only land neighbour of the UK and we sell each other goods and services worth more than €1 billion every week.

So as the UK leaves the European Union, I understand the importance of addressing the unique circumstances of Ireland, including the land border. I know the concerns about the possible impact on businesses and livelihoods. And I realise that, for Irish people, the future of the Border is not simply a matter of economics. Above all, there is the need to preserve the ties that exist between communities across the island of Ireland.

I am determined to work alongside the Irish Government to reach a solution that meets all our needs. We share a commitment to upholding the Common Travel Area and Belfast Agreement. We have already made good progress on maintaining the Common Travel Area. No Irish national will be required to apply for settled status; the long-standing and reciprocal rights to work, study and use public services will be maintained. I have no doubt that, with goodwill and ingenuity , an answer can and will be found.

But we are in the middle of a negotiation. Today, I look forward to meeting Ireland’s Minister for Foreign Affairs, Simon Coveney, and I am sure we will discuss Britain’s future relationship with Ireland after Brexit.

I am determined that the UK will be more engaged and outward-looking than ever before; hence I will be talking to Mr Coveney about the full range of international issues

We will also cover some of the key global issues, while celebrating the unique friendship between our countries. I will reassure Mr Coveney and everyone I meet that Britain’s impending departure from the EU does not amount to the UK cold-shouldering Ireland or turning away; on the contrary, I want to strengthen our ties in the years ahead.

The dry numbers about trade and investment are only part of the picture; the modern story of Anglo-Irish partnership comes from the easy familiarity between our peoples, from the shared task of promoting peace and prosperity in Northern Ireland, and from the manifold cultural, scientific and sporting links between our countries.

In your National Science Week, I will be meeting young Irish people and learning how they are contributing to Anglo-Irish partnership in technology and innovation. I have no doubt that the talent, friendship and vision of young people from Ireland and the UK will ensure that our friendship endures long into the future.

And do not believe anyone who says that by leaving the EU, the UK is turning its back on the world. The exact opposite is true: I am determined that the UK will be more engaged and outward-looking than ever before; hence I will be talking to Mr Coveney about the full range of international issues. I want to learn his insights about East Africa, where he recently travelled, and discuss how best to promote our shared values, including freedom of expression and the importance of female education.

Our countries also share long experience of international peacekeeping. Ireland has a proud history of unbroken service to United Nations operations dating back to 1958. Today, more than 600 Irish military personnel are deployed on a range of UN peacekeeping missions, including in Lebanon and the Golan Heights.

Back in January 2015, our countries signed a memorandum of understanding in Dublin Castle, allowing the UK to benefit from Ireland’s unique experience of UN peacekeeping. Since then, your troops have helped to prepare ours for their deployments on UN missions in South Sudan and Somalia.

The friendship between our countries has flourished in recent decades. There was a time when the idea that Britain and Ireland would jointly commemorate the centenaries of the Easter Rising and the Battle of the Somme – as we did last year – would have been unimaginable. I am determined to stay on the path that leads to an even closer friendship in the decades ahead.

Boris Johnson is foreign secretary of the United Kingdom