Government needs to be more honest about prospect of hard Border 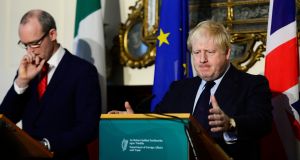 Minister for Foreign Affairs Simon Coveney with Boris Johnson in Dublin: The visit of UK foreign secretary last Friday exposed the hollowness of the British claims that they want to avoid a hard Border. Photograph: Cyril Byrne

The sneering anti-Irish editorial in the UK edition of the Sun last weekend represents a warning that things are about to get dirty as posturing over Brexit gives way to give way to political reality.

Ever since the Brexit referendum decision 18 months ago both the Irish and British governments have been parroting the line that they do not want to see a return to the hard Borders of the past.

It will be hard to maintain this illusion for much longer as there is no escaping the fact that the inevitable consequence of a British decision to leave the EU single market and customs union means a hard Border on the island of Ireland or alternatively down the middle of the Irish Sea.

If the British government and the Democratic Unionist Party stick to their refusal to countenance any kind of trade order between Northern Ireland and the rest of the UK then it will have to be a land border of some kind.

The insistence by Taoiseach Leo Varadkar that it is up to the British to show how the current Border arrangements can be maintained is all very fine as a political holding tactic but in reality it will be up to the Irish side to implement a new Border regime if, as now looks inevitable, the UK leaves the EU single market and customs union.

The visit of UK foreign secretary Boris Johnson to Dublin last Friday exposed the hollowness of the British claims that they want to avoid a hard Border. He obviously knows there is no other possible outcome given that he is one of the strongest advocates of the policy that will lead to one.

For all his affability Johnson is a dangerous and calculating political opponent. That was evident in his insistence that the Border issue should be dealt with in phase two of the Brexit negotiations dealing with future trade rather than in phase one as the EU is insisting.

This is an obvious attempt to use the Border as a bargaining tool in the negotiations that the British really care about: the future trading relationship between the UK and the EU.

Thankfully from an Irish perspective the EU wide consensus that the Border issue needs to be sorted out in phase one is holding strong at European Commission level and across the member states with EU chief negotiator Michel Barnier refusing to budge from that position as late as Monday of this week.

As the Irish Border is one of the three core items to be settled in phase one of the Brexit talks, along with the UK exit bill and citizens’ rights, there seems little likelihood of enough progress at next month’s European Council to pave the way for phase two of the talks on a trade deal. That in turn means a hard trade Border of some kind on the island is looking every more likely.

One of those who knows most about this topic is the former head of the World Trade Organisation and former EU trade commissioner Pascal Lamy. On a recent visit to Dublin he dismissed the idea of a frictionless Border as a fairytale.

“No Border is simply impossible,” said Lamy. For him the question was whether the Border will be in the middle of the Irish Sea or across the island landmass.

Lamy, like the Irish Government, maintained the issues surrounding Brexit were a British problem and suggested that a Border in the Irish Sea is the least worst option. “The reality is that we in the EU – Ireland and the continent together – have a desire to limit the damage of the consequences of the British problem in Europe.”

That is all very well but the consequences of the British problem will be far more serious for Ireland than anywhere else and the Government here needs to be as fully prepared as possible for whatever kind of Border that does emerge.

A suggestion some time ago that the Government had abandoned work on making a new Border as frictionless as possible appears to be wide of the mark and that is welcome news.

It is imperative that this State is ready for all eventualities. There is also a need to prepare people for the worst as further encouragement of wishful thinking could quickly turn to disillusionment with the EU when the harsh reality of the Border has to be faced.

One inevitable response will be lots of publicity for a noisy lobby blaming the negative consequences of the new Border on the shoulders of the EU rather than the UK and following that by promoting the cause of an Irish exit.

Some of the most vocal critics of Government policy during the financial crisis who advocated disastrous policies such as leaving the euro zone and burning the bondholders have already tried to get this bandwagon rolling.

If those in authority continue to feed delusions about the prospect of avoiding a hard Border the shock when a Border does emerge could begin to undermine the strong public support for remaining in the EU.