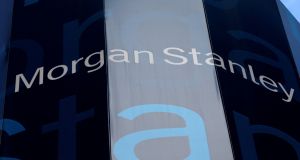 Earnings applicable to the bank’s common shareholders soared to $1.51 billion (€1.41 billion) in the three months ended December 31st from $753 million a year earlier, while earnings per share increased to 81 cents from 39 cents.

Revenue in the bank’s fixed-income business jumped to $1.5 billion in the quarter from $550 million in the same period last year, an increase of about 173 per cent.

JPMorgan Chase & Co, the number one US bank by assets, reported a 31 per cent rise in fixed-income revenue last week, while second-ranked Bank of America said its revenue from trading fixed-income securities, currencies and commodities had risen 12 per cent.

Morgan Stanley ranked second in worldwide announced M&A deals during 2016, according to Thomson Reuters data. The bank laid off a number of senior investment bankers earlier this month and cut bonuses by roughly 15 per cent, according to sources familiar with the matter. – (Reuters)

1 Citigroup warns that markets are out of step with reality
2 Chris Johns: Past is another country when it comes to our post-pandemic future
3 ‘I’m so lucky to be in the Caribbean – a million miles from Derry Girls’
4 Donohoe told insurers they risked ‘irreparable damage’ to reputation
5 Michael Smurfit: ‘I asked Trump to invite me to the White House for my 80th birthday’
6 Small businesses are cannon fodder in zealous anti-virus experiment
7 Household savings soar as consumers stop spending
8 Tobacco makers still trying to make a mint from Irish menthol market
9 ‘The recovery needs to be a full-scale economic renewal’
10 Minister calls on EU to act against tobacco firms ‘undermining’ menthol ban in Ireland
Real news has value SUBSCRIBE