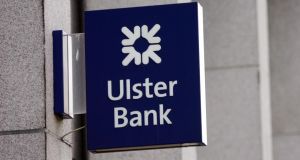 Ulster Bank said the new salary ranges would come into effect “immediately for new staff and where beneficial for the purposes of pay reviews”. Photograph: Bryan O’Brien

Ulster Bank in the Republic has agreed to engage in talks with the Financial Services Union (FSU) on the implementation of controversial new salary ranges.

The two sides are due to meet today on this contentious issue, which resulted in the FSU suspending a ballot on pay earlier this month after Ulster Bank implemented the new ranges.

This was an unprecedented decision by the union given that the ballot on pay, which involves increases averaging 2 per cent, had already commenced.

It followed Ulster Bank’s decision to implement the salary ranges for new entrants and transfers, with staff told they would be placed in their ranges by the end of February.

The FSU wrote to the bank, saying the move to implement the new ranges was a “serious breach of good faith”.

Ulster Bank said the ranges would come into effect “immediately for new staff and where beneficial for the purposes of pay reviews – for other staff it will be 2019 before these changes impact for pay reviews”.

The FSU welcomed the bank’s invitation to talks and expressed the hope that they would avoid a “deterioration in relations and resolve the outstanding differences on ranges in the Republic”.

“We hope that the forthcoming engagement can reach a resolution of this important matter,” the FSU said, adding that the suspension of the ballot would remain in place for the duration of the talks.

In his recommendations on January 5th, independent mediator Kieran Mulvey did not recommend in favour of either side. He suggested that the proposed new reference salaries and ranges be published to staff for information purposes and encouraged “further engagement” on the matter.