Goldman Sachs’ chief takes Theresa May to task over Brexit 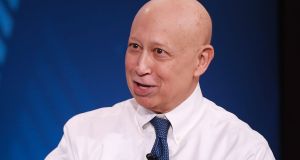 Lloyd Blankfein, who was reported as asking Theresa May where financial services ranked in her top three priorities for Brexit. Photograph: via Getty Images

Goldman Sachs’ chief executive has emerged as a thorn in the side of UK prime minister Theresa May, warning that European financial centres could challenge London unless her government gives more priority to the City in Brexit negotiations.

The stance was evident when Ms May met Wall Street bosses at the World Economic Forum in Davos 10 days ago to discuss her strategy for leaving the EU, according to several sources briefed on the closed-door meeting.

Lloyd Blankfein, head of the US investment bank for more than a decade, asked Ms May where financial services ranked in her top three priorities for Brexit, according to the people.

“Blankfein talked tough,” said one of the sources. “He said there was no reason why European financial centres can’t set up as effective rivals.”

The Goldman boss mostly asked questions of Ms May, and delivered them in a light-hearted way, the people said. Despite the cordial mood, some Wall Street bosses in the room detected a deeper concern about the UK’s position in Mr Blankfein’s comments. “There was a particular exchange between them,” said one person.

Goldman was one of the biggest donors to the Remain campaign in last June’s referendum and employs about 6,000 staff in the UK, its main European operation. Mr Blankfein has expressed bemusement to colleagues over how Ms May appears to treat finance like any other industry, despite its major contribution to the UK economy and its exchequer.

Bankers looked on enviously in October when Ms May gave Nissan a guarantee that its terms of trade would not be hurt by Brexit, winning a commitment from the Japanese carmaker to expand production at its plant in Sunderland.

Ms May’s meeting with Wall Street executives came only hours after her address to the Davos elite, outlining plans for the UK to “step up to a new leadership role” in the global economy after Brexit and remain a “great global trading nation”.

Some foreign bank bosses were still reeling from an earlier speech by her in London, in which she confirmed for the first time that the UK would not be staying in the EU’s single market or customs union. City bankers fear this outcome could cut them off from EU clients.

A number of financiers spoke publicly at Davos about their plans to move thousands of jobs out of London as they prepared for a “hard Brexit”, including the heads of HSBC, UBS and JPMorgan Chase.

Mr Blankfein told Bloomberg TV that his bank was already “slowing down” its recent shift of resources to the UK because of the referendum decision. He said immigration had to be Ms May’s “declared priority” but he believed “the financial services industry is so important to the British economy . . . so that will become an important priority”.

Also meeting Ms May in Davos were Larry Fink of BlackRock, Stephen Schwarzman of Blackstone, James Gorman of Morgan Stanley, Brian Moynihan of Bank of America and Jamie Dimon of JPMorgan. All parties declined to comment.

Several of the executives came away from the event impressed by Ms May’s grasp of the detail about how the City could be affected by Brexit. “She is on top of her brief,” said one person involved.

The prime minister also had a one-to-one meeting with Mr Schwarzman to discuss the best way to approach Donald Trump, ahead of her meeting with the new US president last Friday.

The Blackstone boss chairs Mr Trump’s new strategic and policy forum, which provides the president with advice from US business leaders.