Junior minister in London in bid to lure firms to Ireland 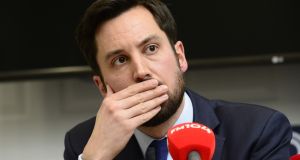 Minister of State for Financial Services Eoghan Murphy will travel to London on Monday to promote Ireland as the “location of choice” for financial services companies looking to access the European Single Market.

Minister of State for Financial Services Eoghan Murphy will travel to London on Monday to promote Ireland as the “location of choice” for financial services companies looking to access the European Single Market.

Mr Murphy will undertake what he described as an “intensive round of stakeholder engagements” also aimed at advancing the State’s case to have the European Banking Authority locate in Dublin.

His visit, during which he will hold bilateral meetings with a number of companies, is part of Government efforts to “mitigate the downside effects of the working out of the Brexit process”.

Mr Murphy said Ireland had a positive track record hosting international organisations and had proven to be an attractive location for their international staff.

“Given the European Banking Authority’s crucial role across Europe, we must ask ourselves what would be the least disruptive, and therefore safest place, to move the EBA to?” Mr Murphy said.

“We have to prioritise minimising disruption of the banking supervision regime in Europe. In my view that puts Dublin at the front of the queue. So we’re going to be very ambitious for this project. It also sits very comfortably with our ambitions for growing international financial services under the IFS2020 strategy.”

Launched in March 2015, IFS2020 is the Government’s five-year strategy for the international financial services sector.

Mr Murphy will also attend a seminar organised by the London-Irish Business Society and Powerscourt.

He will be joined by the governor of the Central Bank, Philip Lane, as well as prominent London-based lawyers and academics.

He will also address an Irish fintech showcase, with speakers from Realex, JP Morgan, Fexco and Currency Fair. That event is organised by the Fintech & Payments Association of Ireland with the support of IDA Ireland.

“Last week’s successful European Financial Forum focused on the pressing issues affecting the global financial services community. I will continue to speak to these issues in London and elsewhere, and promote Ireland as a ‘rock of certainty’ in uncertain times,” Mr Murphy said.

1 Comcast acquires Irish cloud-based telco Blueface
2 Apple’s iPad turns 10 with hints of a resurgent future
3 Pilita Clark: When a rude boss keeps you waiting, why not walk out?
4 Money matters: ‘My father embarrassed us with his haggling’
5 Opioid executive admits to ‘no morals’ ahead of prison term
6 Henderson Park seek €400m+ for prime Dublin office blocks
7 Little strategic thinking in election manifestos of Fine Gael and Fianna Fáil
8 US threatens retaliation against EU over proposed carbon tax
9 Five things to watch out for in Apple’s earnings
10 Irish-founded ‘kid tech’ company SuperAwesome gets Microsoft backing
Real news has value SUBSCRIBE