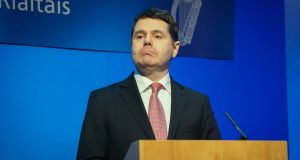 The State is facing High Court actions from about 500 hospital consultants over the failure to pay them agreed levels of salary nearly a decade ago.

The Government on Thursday insisted it would “vigorously defend” these cases, despite withdrawing appeals it had lodged against findings made last year by the Employment Appeals Tribunal in favour of two senior doctors.

The appeal was formally withdrawn at the High Court on Thursday in the presence of lawyers for the HSE and the two consultants.

Government sources maintained the decision not to fight the ruling did not set a precedent. It is understood that while the tribunal found the non-payment of portions of the doctors’ salaries amounted to an unlawful deduction under the Payment of Wages Act, the forthcoming High Court cases centre on broader contractual issues.

The Government on Thursday, citing confidentiality issues, declined to give any details regarding the decision not to go ahead with its planned High Court appeals against the rulings.

Under a contract introduced in 2008, consultants agreed to major work-practice changes, including the restriction – and in some cases, the elimination – of private practice, weekend working and extended rosters. In return, then minister for health Mary Harney offered them salaries of between €170,000 and €240,000, with increases to bring the rate up to these levels to be paid on a phased basis.

The first payment was made, but not the second phase, following the collapse in the public finances and the State later cut consultants’ pay by 15-25 per cent.

About a year ago, the Employment Appeals Tribunal awarded Dr Thomas Hogan, a former consultant anaesthetist at a number of Dublin hospitals, just under €100,000. A second consultant, Dr John McDermott, who worked as an endocrinologist at Blanchardstown hospital, was awarded €14,000.

Speaking in the Dáil on Thursday, Minister for Public Expenditure Paschal Donohoe said he would not comment on the two individual cases, but the Government would “vigorously defend” any further legal actions by consultants.

In response to repeated questions from opposition TDs, Mr Donohoe declined to say how much the two cases would cost, or what the estimates were for the potential costs to the exchequer of settling or losing cases against similarly affected consultants.

The HSE had previously forecast that in a worst-case scenario about 2,000 consultants could have to be reimbursed and the ultimate gross cost could be about €700 million.

Fianna Fáil health spokesman Billy Kelleher has said that whatever the circumstances that caused the underpayment to consultants, no frontline health services should be affected or reduced as a result of having to pay any compensation.

The Irish Hospital Consultants’ Association welcomed the decision, while the Irish Medical Organisation called on Minister for Health Simon Harris to confirm he planned “to restore unpaid monies to all consultants whose incomes were impacted by the unilateral decision of a previous minister to withhold payments contractually due to consultants”.

“The HSE understands the Government intends to vigorously defend all such cases . . . in the public interest.”