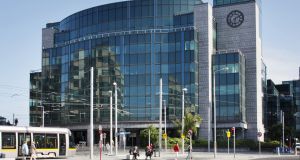 The IFSC in Dublin. Japanese banks and brokerages are among global financial firms considering moving some functions from London to retain access to the EU

Dublin could be in line for two new financial services projects as global companies seek to position themselves outside the UK post-Brexit.

On Monday, Luxembourg fund management company FundRock said it would open a Dublin office to serve its growing Irish base. The company, which also has an operation in the UK, is opening the office to leverage on post-Brexit opportunities.

In a statement the company said: “Following the market uncertainty created in the investment management sector post-Brexit, FundRock is opening an Irish office to service their clients’ needs and capitalise on the significant rise in UK-based deal flows.”

Revel Wood, CEO of FundRock, said the move to Ireland was a crucial part of the company’s long-term strategy.

“This expansion into Ireland aligns with our ambition to offer service excellence to a global client base by providing a value-added solution for all their domestic fund management needs across Europe.”

Meanwhile, Japanese securities group Daiwa said it was considering Dublin and Frankfurt among candidate cities to host European operations if it moves out of London following Brexit, the Japanese brokerage’s top executive said.

The Tokyo-based firm would need to establish a licensed entity in the European Union following the UK’s decision to leave the bloc, chief executive Takashi Hibino said. It was running simulations with a consulting firm, he said on Monday at a briefing in Tokyo.

Japanese banks and brokerages are among global financial firms that are considering moving some functions away from the UK capital to retain access to the EU.

Daiwa previously had substantial Irish operations through a custody and fund servicing subsidiary. However, in 2012 this entity was acquired by Sumitomo Mitsui Trust Bank. – Additional reporting Bloomberg