Tap and go success depends on how you count 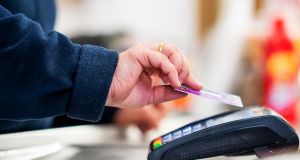 Despite the pandemic, people used contactless payments less often in May than they did before the virus struck

You can never accuse the banks of missing the chance to take advantage of a crisis.

If the customer gets their sums wrong, they pay (with interest); when the banks get it wrong, as they did so spectacularly ahead of the financial crash, the taxpayer pays as society needs viable financial institutions to fund economic growth.

And all the time, they nip and tuck, cutting costs here, staff there, as they look to meet the ultimate aim of private enterprise – deliver a return for their shareholders.

But Irish customers are notoriously fond of physical cash. To wean them onto contactless, banks initially made such transactions free of charge. Just ahead of coronavirus, that was coming to an end: it has been deferred during the pandemic but charges will inevitably return.

Covid-19 has been a boon for banks generally. Customers confined more to home have been shopping electronically online. And where they do visit stores, fear of infection has seen some stores insist on contactless payment and most others express a strong preference for it.

What better chance to persuade customers of the virtue of contactless. Never one to miss an opportunity, industry group the Banking and Payments Federation of Ireland on Tuesday hails a “strong recovery in contactless payments” in May.

Spending on contactless was up 7 per cent this month, it notes, to a “record” €600 million. “Overall, the figures indicate that consumers are spending more than before through contactless payments.”

Well, that depends how you count. When you look fully through the release, a different picture emerges.

Despite the encouragement of a pandemic and lockdown, people actually used contactless payments less often in May than they did back in February before the virus struck. The spend is higher in part because, from April, you were able to tap and go for sums up to €50 as against €30 previously.

If the spend per transaction had remained steady, the value of contactless business would have been over 17 per cent lower than in February. That makes sense in an economic shutdown but, when you’re trying sell the virtues of a cashless society, it’s not such a great headline.