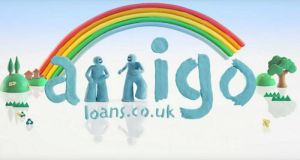 Amigo started lending in the Irish market last year, targeting people who have been turned down by traditional lenders.

Moneylender Amigo Loans warned on Monday that it was struggling to deal with a rising tide of customer complaints, forcing it to delay its full-year results and set aside further cash to deal with the backlog.

The moneylender started lending in the Irish market in February last year, targeting people who have been turned down by traditional lenders, and offering loans of up to €5,000 at an annual rate of 49.9 per cent.

Shares in the company dropped by 25 per cent to a fresh record low after the announcement, bringing its market capitalisation to just £35 million – less than the amount it expects to spend remedying the complaints.

Last month the subprime lender made an agreement with the UK Financial Conduct Authority requiring it to respond to about 9,000 customer complaints by the end of this week.

On Monday, however, Amigo reported a “substantial increase in the rate of complaints” and said it was in discussions with the regulator to extend its agreement.

Amigo dominates the market for guarantor loans, providing cash to people with weak credit histories if they have friends or family willing to step in if they fail to repay.

The FCA is investigating whether its approach to checking if customers can afford to repay their loans since 2018 has been compliant with UK lending regulations.

The investigation began after Amigo founder James Benamor accused the company’s board of recklessly extending new loans under the same terms that had led to complaints about “irresponsible lending” in the past.

Mr Benamor’s battle with Amigo’s new management culminated in an unsuccessful attempt by him to depose the entire board of directors last week.

The 43-year-old said in response that he would sell his 61 per cent stake in the company.

Amigo put itself up for sale earlier this year and held discussions with one unnamed company about a potential £100 million deal, but the buyer pulled out this month, blaming the “current market environment”.

“While there are options to explore in reaching some form of resolution or closure with the regulator on complaints, there is no end in sight on the issue at present,” he said.

Amigo said it would “continue to assess each complaint on a case-by-case basis to ensure fair outcomes for our customers”, but said there would be a “material” cost on top of the £35 million it announced for dealing with the initial backlog.

The company said it would publish its full-year results by July 23rd, compared with its earlier aim of reporting by the end of June.

Shares in Amigo, which listed at 275p each just two years ago, have fallen 89 per cent since the start of this year, to 7p per share. – Copyright Financial Times Limited 2020

1 Why gift a son now if it eats into his tax-free inheritance threshold?
2 Big Four told to outline plans for audit split in UK by October
3 Stocktake: Playing poker with the day traders
4 Air Canada resumes passenger flights from Ireland
5 Mortgage arrears: Prevention is definitely better than cure
6 Ballymore acquires London shopping centre for €83m
7 ‘The rental situation stops me moving back home’
8 Eight places that will pay you to move there
9 Investor Noel Smyth to report plastics group IPL to regulator
10 Chinese FDI to Ireland rises 56% as it falls to nine-year low in US
Real news has value SUBSCRIBE