Ireland in for another rough ride on tax

US move may simply be pre-election play by Trump 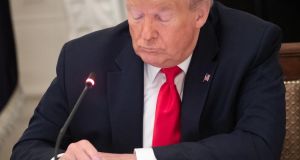 Donald Trump: standing tough against the Europeans in defence of big business plays well with his voters as a presidential election looms. Photograph: Saul Loeb/AFP via Getty Images

Global tax is a chess game and the US just made a big move.

Pulling its participation in talks on taxing digital companies is one of two things. One is a pre-election play by US president Donald Trump. and kicking the thorny issue of tax out past November’s election is advantageous for the current Washington administration.

Alternatively, the US exit could be a more decisive rupturing of global efforts to find common ground on tax, something that may prove extremely problematic for Ireland.

As host to most of these digital giants – Apple, Facebook, Google – Ireland’s default position is to side with the US. That’s why we oppose EU moves to push ahead with a digital tax and side with Apple in its appeal against the European Commission’s €13 billion tax ruling. But also we sit within Europe and will need its help on Brexit.

Moves by the Organisation for Economic Cooperation and Development (OECD) to reform global tax rules have been only partially successful. And Europe’s push for a digital tax is a reaction to the fact that these companies still pay very little tax in the European countries where most of their sales are.

You could argue that companies such as BMW and Mercedes play very little tax where most of their global sales are, but tech companies do it on a different scale.

If Europe pushes ahead with a tax on digital sales and the US retaliates, the State will once again be the meat in the global tax sandwich, drawn in different directions by its two allies.

While this will be difficult, politically and diplomatically, it’s unlikley to change the economics. These companies will continue to use Ireland as a bridgehead to Europe. The initial clampdown on multinational tax avoidance in 2014 and 2015 and the more recent US tax reform have been a boon for Ireland, despite multiple warnings that they posed major risks.

These companies have shipped more assets here and increased the size of their Irish operations. This is why corporation tax receipts have rocketed.