Deal timely as airline hopes to restart flying within weeks 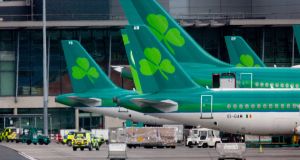 Aer Lingus has agreed with unions that it will row back from cost-cutting plans Photograph: Tom Honan

Signs that a deal may be possible with Aer Lingus unions have probably come just in time for the Irish airline, which, along with all others in Europe, has been largely grounded by Covid-19 travel bans for the past three months, but now hopes to restart some flying within weeks.

Aer Lingus has agreed with unions, including Siptu and Fórsa, that it will row back from cost-cutting plans due to run until August, including further pay cuts and reducing staff levels to 30 per cent, and reverse plans for temporary lay-offs at Shannon. In return, staff must agree to work-practice changes.

Many of these involve greater flexibility in turning aircraft around, preparing them for takeoff and aiding in boarding passengers. There will also, not surprisingly, be new practices for cleaning craft. Some workers will also be trained to carry out extra duties outside their existing roles.

Available work will determine pay, so three days rostered and paid will equate to 60 per cent. The agreement notes that this should increase as time goes on. Unions cannot seek any pay increases, or submit any pay claims, until February 28th, 2022, the period covered by the agreement.

The date at least gives a sense of how long Aer Lingus thinks it will be dealing with the fallout from what is generally agreed to be the worst crisis to hit commercial aviation in the industry’s history. Nevertheless, the document indicates that the airline sees difficulties easing through that time, as it suggests that workloads will increase over the document’s lifetime.

Whatever the likely speed of recovery, workers will have to agree to the deal for the compromise to succeed. News of their acceptance or otherwise will emerge in coming days.

If they do agree, Aer Lingus will at least be able to focus on its plans to restart some services from July 1st. Likely destinations include popular sun spots such as the Costa del Sol, Canaries and Costa Blanca. Many sun-starved Irish people will be hoping those services take off.

If they do, Aer Lingus and its workers will be flying into a future very different from what they had expected in January.