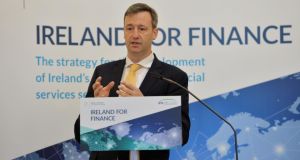 Minister of State for Financial Services and Insurance Michael D’Arcy said it was the Government’s position that the “recalibration” of awards downwards would involve a number of factors. Photograph: Alan Betson

The high personal injury awards being made by judges in the circuit and district courts is “driving the compo culture in Ireland, ” according to Minister of State Michael D’Arcy, who has special responsibility for insurance.

This is despite the fact that rulings in recent years by the Court of Appeal that should be pushing downwards the size of awards for minor to moderate injuries are binding on all courts.

Recent research has indicated that the awards being made in the District Court and Circuit Court are four to five times greater than the amounts being awarded for comparable injuries in England and Wales. “In our view, that is driving compo culture in Ireland,” he said.

Mr D’Arcy, who as Minister of State in the Department of Finance is working on confronting rising levels of insurance premiums, said it was the Government’s position that the “recalibration” of awards downwards would involve a number of factors.

One was the effect of the Court of Appeal decisions, while another was the establishment by the proposed new judicial council of a committee that would look at award levels in the courts.

A Bill establishing a judicial council, which is something that was first sought by the judiciary almost 20 years ago, is currently making its way through the Oireachtas. Mr D’Arcy said he was hopeful it would become law by the summer and that the judges would then make award levels a priority issue.

Fianna Fáil justice spokesman Jim O’Callaghan, a senior counsel, said the decisions of the Court of Appeal have had a significant impact in reducing the amount of damages awarded for personal injuries in the High Court.

“All courts assessing personal injuries claims must now have regard to the recalibration of awards identified by the Court of Appeal in those judgments.”

The Court of Appeal judgments are binding on lower courts and, consequently, are considerably more influential than the statutory requirement for courts to “have regard” to the book of quantum, he said.

The book of quantum is used as a guide by judges when deciding on personal injury awards, and gives suggested ranges for different types of injuries, based on recent awards.

“The judicial council Bill will enable judges to set thresholds for personal injuries awards,” Mr O’Callaghan said. “However, that process has already commenced and is being implemented as a result of these recent decisions of the Court of Appeal.”

The proposed judicial council, which is supported by all the major political parties, is being set up to promote high standards in the judiciary. It will facilitate ongoing education and training, and will also allow for the investigation of allegations of judicial misconduct.