Standard Chartered sets aside $900m to cover US, British fines 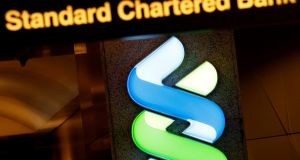 Standard Chartered (StanChart) has set aside $900 million (€792 million) to cover fines resulting from regulatory investigations in the United States and Britain, potentially drawing a line under inquiries which have dogged the bank for years.

News of the provision, made for the fourth quarter of last year, comes ahead of a strategy update from the bank along with its 2018 earnings results on Tuesday, when chief executive Bill Winters is widely expected to outline an overhaul of operations.

In a filing to the Hong Kong Stock Exchange on Thursday, StanChart said the provision related to the potential resolution of US investigations into alleged violations of US sanctions, and for probes relating to foreign exchange trading.

The filing is the first time the bank has quantified the possible cost of the investigations. Previously it said only in filings that it was “not practicable” to estimate the financial impact because the range of potential outcomes was too broad.

StanChart also included in the provision a £102.2 million pound (€117.7 million) fine from Britain’s Financial Conduct Authority related to historical financial crime controls. It said it was considering its options in relation to the penalty.

In 2012, the bank agreed to pay $667 million to settle alleged sanctions breaches from 2001 through 2007. It also agreed deferred prosecution agreements with the Department of Justice and New York County District Attorney’s Office. The agreements were extended to March 31st this year in December 2018.

The current investigations are examining the extent to which the bank allowed clients with Iranian interests to conduct transactions after 2007, as well as the extent to which it shared such dealings with authorities at the time of the 2012 settlement.

In October, Mr Winters said US authorities were also investigating whether StanChart breached Iran-related compliance rules as recently as 2013.

The 2018 provision will reduce profit at the bank, which analyst estimates had previously put at $3.9 billion.

“The provision is huge and unexpected,” said Steven Leung, a sales director at brokerage UOB Kay Hian. However, the impact on StanChart stock might be limited if the profit hit meant future earnings could be flattered by the low comparison with 2018, Leung said.

In the first hour of London trade, shares in the bank were up 1.7 per cent compared with a 0.5 per cent fall in the blue-chip FTSE 100 index. In Hong Kong, shares of StanChart closed 0.6 per cent lower.

“Though the provision amount is not small, it removes some of the uncertainties related to past issues,” said Hao Hong, brokerage BOCOM International’s head of research.

Last month, New York’s financial watchdog fined StanChart $40 million for attempting to rig foreign exchange transactions from 2007 through 2013 - a penalty which the bank said was also included in the $900 million provision.

Asia, Africa and Middle-East focused StanChart has seen a slump in fortunes over the past few years as restructuring under Mr Winters repaired a balance sheet hit by excessive lending in the previous decade, but left the bank struggling to lift profit.

StanChart has projected revenue growth of 5 to 7 per cent over the next three years, but Jefferies analysts in a report this week said a consensus of analyst estimates was “anchored at the lower end” of the guidance, adding that even this “looked challenging”.