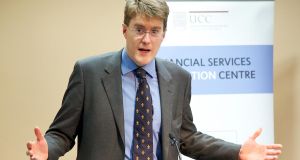 The owner-managers of Harvest – Gerry and Terry Devitt, and Eugene Foley – and the rest of the management team will remain with the firm, which oversees about €1 billion of assets on behalf of pension funds, private individuals, corporations and charities.

The Irish Times first reported in late 2017 that both sides had held discussions as St James’s Place weighed opportunities to expand into the Republic.

Jonathan McMahon, executive director at St James’s Place and a former senior head of financial regulation with the Central Bank of Ireland, said he expected the acquired business’s level of assets under management to at least double over the next five years through organic growth and possible further acquisitions.

“As a marketplace, Ireland shares many of the same characteristics as the UK, while Harvest has an established track record of providing high-quality financial and investment advice and pension services to clients there,” said Mr McMahon. “The market is fragmented in Ireland and there are opportunities for consolidation.”

Mr McMahon declined to discuss the price. However, St James’s Place executives referred to the acquisition on a conference call with analysts on Wednesday, without naming the target. They said the deal involved a purchase cost of less than £10 million (€11.7 million).

Harvest’s chief executive, Gerry Devitt, said the company was “extremely excited” about the deal, which is subject to regulatory approval. Harvest, established in 1993, has more than 1,500 clients and employs about 60 people in Dublin.

Harvest was in advanced talks to be bought by Cantor Fitzgerald Ireland in 2016, but negotiations ended without a deal. It is believed that Davy and Investec Ireland also ran the rule over the company.

St James’s Place was established in 1991 by a group of City of London grandees and has £102 billion of client funds under management. The company has a wealth management business in Belfast and a regulated life insurance business in Dublin servicing overseas clients.

Mr McMahon said Harvest would probably be rebranded under the group’s name. While the Belfast and Dublin businesses will be run separately, there will be some overlap, as the firm’s partners in Northern Ireland have clients who operate on both sides of the Border.

St James’s Place reported on Wednesday that its pre-tax profit rose to £211.9 million last year from £186.1 million a year earlier, even as the rate at which wealthy clients gave it money to manage eased as a Chinese economic slowdown, Sino-US trade tensions and Brexit uncertainty weighed on investor sentiment.