FBD to double dividend after strong 2018 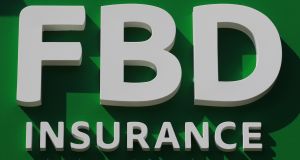 FBD Holdings said on Wednesday that it planned to more than double its dividend to 50 cent per share after Ireland’s only publicly-quoted indigenous general insurer reported strong full-year results.

The Dublin-based company’s pretax profit edged up to €50.1 million from €49.7 million for the previous year.

FBD’s combined operating ratio – costs and claims expenses as a proportion of premium income – fell to 81.2 per cent from 86.2 per cent, benefiting as the company released €28.7 million of reserves that it had previously set aside for claims. A figure below 100 per cent shows that an insurer is earning money on policies it is underwriting.

Group chief executive Fiona Muldoon said the cost of insurance claims remained too high in Ireland. Mr Justice Nicholas Kearns, former president of the High Court, said last year in his final report of the Personal Injuries Commission that the average award for whiplash is 4.4 times higher in Ireland than in Britain.

“In a funny way, strong results like these don’t help” the argument, Ms Muldoon said to analysts on a call, before adding that the political agenda, which was highly focused in Ireland on tackling rising insurance costs a few years ago, “has moved on slightly”.

As immediate steps, Ms Muldoon told The Irish Times she would like to see the powers of the Personal Injuries Assessment Board (PIAB) enhanced as “too many people are bypassing it” and going to court. She also wants insurance companies to have the right to share data on potentially fraudulent and exaggerated claims.

“Data privilege is all very good, but it’s very hard to catch fraudsters unless the guards and ourselves are allowed to share data,” she said.

FBD group’s gross written insurance premiums dipped to €371.5 million last year from €372.4 million in 2017 as it dealt with “competitive challenges”, particularly in the second half.

“Our continued focus on underwriting discipline has delivered excellent underwriting profits for 2018,” said Ms Muldoon. “In 2019 we are focused on our growth plans as a strong, independent Irish business. While the impact of any Brexit is unwelcome to FBD and to our customers, we are resilient and we will navigate this together with Irish farming and with all other Irish businesses.”

FBD paid Canadian financial group Fairfax €86 million last year to buy back and cancel a bond acquired from the insurer in 2015 to shore up its balance sheet at a time when it was losing money.

The repayment was at a €16 million premium to the original value of the bond, reflecting the fact that Fairfax had the right from next month to convert the notes into a 19 per cent stake in FBD.

The company part-funded the repurchase by issuing €50 million of subordinated debt in the market.