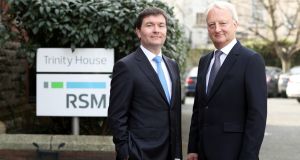 Mid-tier accounting firm, RSM Ireland, has opened a new Dublin office as part of an expansion of its management consultancy business.

The firm, which employs about 185 staff overall, also says its revenues have “increased by 40 per cent over the past two years to €22 million”.

RSM has opened a new office in Ranelagh, just to the south of Dublin city centre, to accommodate its growing management consultancy unit. RSM’s Irish headquarters are already located elsewhere in the city, while it also has offices in Offaly and Laois.

Staff numbers at the consultancy unit have almost quadrupled to 52 over the past two years, it says, as it branches out into offering companies advice on areas such as technology, human resources and outsourcing.

John Glennon, the managing partner of the firm, said the unit’s staff numbers will grow by half over the next three years.

RSM, which says it is the eighth largest accounting firm in Ireland, is targeting future business from fast-growing “midmarket” companies.

Mr Glennon said it currently earns about 55 per cent of its revenues from consultancy and transaction advisory services, and about 45 per cent from traditional financial accounting lines of business.

“When we set up the consulting unit in the recession, it was to help our own accounting clients – we’d tell them to cut costs but we didn’t want to just walk out of the room without helping them decide how,” said Mr Glennon.

“Now that the economy has improved, consultancy is all about helping them build teams, how to motivate young millennials and deliver outcomes.”

RSM announced that its transaction advisory team has expanded with the addition of Tim Quigley this month as corporate finance partner, specialising in mergers and acquisitions and fund raisings. He previously worked with Kish Capital, Merrion Capital and Deloitte.