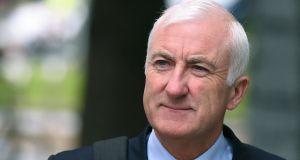 Former Irish Life & Permanent (IL&P) chief executive Denis Casey has lost his appeal over his conviction for his role in a multibillion-euro conspiracy to deceive people about the true financial state of Anglo Irish Bank in 2008.

A five-judge Supreme Court on Thursday unanimously rejected the appeal by Mr Casey, who has served a sentence of two years and nine months’ imprisonment imposed in July 2016 after he was found guilty of a conspiracy to defraud.

A jury at Dublin Circuit Criminal Court had found Mr Casey conspired with Anglo’s John Bowe and Willie McAteer to engage in transactions between Anglo and IL&P aimed at fooling people into thinking Anglo had received an extra €7.2 billion in customer deposits.

The appeal centred on whether Mr Casey was entitled to use the roles of the Financial Regulator, the Central Bank and the Department of Finance as a defence in his trial.

Mr Casey argued he authorised the transactions on the basis the regulator was fully aware of them and they were encouraged as part of the “green jersey agenda” involving Irish banks supporting each other during the financial crisis.

Mr Casey said he honestly believed that, in September 2008, Anglo could not have approached IL&P for support without the knowledge of the regulator.

The essence of his case, his counsel agreed during the appeal, was the State could not prosecute or convict Mr Casey for this offence because a State agent had got him “into this mess”.

That defence of officially-induced error was not permitted go to the jury by the trial judge.

The core legal issue before the Supreme Court was whether or not a defence of officially-induced error is available under Irish law to Mr Casey and, if so, whether, on the evidence, it was open to Mr Casey.

On Thursday, Mr Justice Peter Charleton, giving the court’s judgment, ruled that officially-induced error is available, within certain parameters, in this jurisdiction as an answer to a criminal charge. On the evidence in this case, it was not available to Mr Casey, he ruled.

Officially-induced error is not a justificatory or excusatory defence in criminal law, he outlined. Rather, it amounts to a legal objection to the continuation of the criminal process.

The proof of elements of unfairness leading to a trial judge staying a prosecution must be established by an accused on the balance of probabilities and the applicability of this plea is a matter of law for the trial judge.

For officially-induced error to be accepted as a bar to a criminal prosecution, an accused must prove they went in good faith to seek legal advice from the relevant appropriate authority on whether or not a proposed course of conduct was lawful.

The proposal about which legal advice is sought must be specific, describing accurately that conduct which is the subject matter of the later criminal charge, he said.

The relevant official’s advice must also be specific and must amount to “legal advice”, or advice of mixed law and fact, in a manner which clearly and unequivocally authorises the conduct as a matter of law.

The advice must cover the specific situation, must be honestly accepted by the accused and must be such that a reasonable person would be likely to act on it. In the commission of the offence, there must be “no deviation” from the apparently authorised conduct.

To raise the defence, an accused must precisely describe before the trial judge what they did rather than evading responsibility through not admitting conduct, he said.