Size of fine is putting former bank chairman ‘to the pin of his collar’, his solicitor says 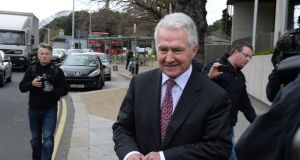 Former Anglo Irish Bank chairman Sean FitzPatrick had his membership of Chartered Accountants Ireland (CAI) revoked and was ordered to pay a fine of €25,000 after a tribunal found he made a series of failures in concealing loans between Anglo and Irish Nationwide Building Society.

Mr FitzPatrick, who also previously led Anglo Irish Bank as chief executive, accepted one of the allegations made against him in respect of the temporary transfer of loans.

“Mr FitzPatrick’s actions point to misconduct rather than mistakes,” Mr Kennedy said, adding that the loan transfers at the time brought the Irish banking system into disrepute. He asked the tribunal to make a finding that the concealment of the loans constituted a “misconduct of a serious nature”.

Mr FitzPatrick’s solicitor Michael Staines said that the former Anglo chairman “accepts what he did here was inappropriate”. “He’s admitted it’s inappropriate and accepted that the conduct is such to bring discredit to himself and the accountancy profession,” Mr Staines said.

The maximum fine the tribunal could impose is €30,000 and the maximum non-financial sanction it can impose is exclusion from membership.

Tribunal chairman and former judge Tom Burgess said Mr FitzPatrick’s actions represented a “willful failure” to adhere to standards within the bank. The fact that the scheme was devised and perpetrated by Mr FitzPatrick when he was in a position of trust was seen as an aggravating factor.

Asked whether Mr Fitzpatrick could afford to pay more than the €20,000 he had offered to pay towards costs, Mr Staines noted that he “would find that extremely difficult to pay” and added the €20,000 was putting him to the pin of his collar.

“We have control of €20,000 that is due to him,” Mr Staines said without going into further detail. The tribunal noted that the only asset Mr Fitzpatrick has is his pension.

Last month The Irish Times reported that Mr FitzPatrick and his wife Catriona are seeking permission to build a new four-bedroom house at the back of the Greystones home where they live.

Mr Staines also gave an undertaking that Mr FitzPatrick, now aged 71, would never again apply to be an accountant.

Mr FitzPatrick stood down from his position as chairman of Anglo in December 2008. In March 2010 he was arrested after members of the Garda fraud squad raided his home. In the same month, Anglo took legal action against him in an attempt to recover unpaid loans of €70 million. Some three months later he was declared bankrupt in the High Court.

In December 2011 Mr FitzPatrick was arrested a second time by gardaí as part of an investigation into “financial irregularities”. He was released without charge. Seven months later he was arrested for a third time and charged with 16 offences relating to his role in advising and lending millions to a golden circle of investors to falsely inflate Anglo’s share price. In April 2014, he was acquitted on all charges against him in relation to the Maple 10 case.

In November 2016, he again went on trial, this time accused of misleading the bank’s auditors over a five-year period. The case was mired with problems and Judge John Aylmer ultimately directed that he be acquitted.

The CAI’s conduct committee is still due to take disciplinary action against Mr McAteer, Peter Fitzpatrick and against Anglo’s former auditors EY.

CAI took its first action against Anglo’s former chief executive David Drumm last July, fining him €15,000 and expelling him for bringing discredit on himself and his profession. Drumm is serving a six-year prison term for conspiracy to defraud.

The Director of Public Prosecutions asked CAI’s professional standards unit in April 2011 to hold off on various disciplinary hearings pending the outcome of a series of criminal trials resulting from the collapse of the bank.

The DPP withdrew its request in August 2018 after Mr Drumm’s criminal conviction.

1 Staff at Dublin and Cork airports to vote on work practice changes
2 Ufurnish: ‘It’s like Skyscanner, but for furniture’
3 Avoca warns of redundancies due to coronavirus
4 Errant texts highlight weaknesses in banks’ digital shift
5 Over 400 complaints from migrant workers at meat plants lodged with WRC
6 Coronavirus: We must save lives but we also need to live
7 Companies without tax clearance shut out of Covid wage subsidy
8 McGann stepping down at troubled Aryzta
9 The Irish Times Company of the Year: the three finalists
10 Transferring the family farm without a tax headache
Real news has value SUBSCRIBE