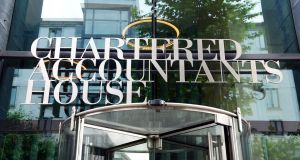 The exterior of Chartered Accountants House on Pearse Street, Dublin. A report on the quality of auditing will be published next year. Photograph: Cyril Byrne

The Irish accounting regulator plans to publish a report in the first quarter of next year that will grade the work of the eight biggest audit firms in the State for the first time.

The findings will be based on inspections by IAASA, the surpervisory authority for the accounting profession, relating to a sample number of statutory audits carried out by the firms in 2018.

The eight firms who have been inspected are EY, Deloitte, KPMG, PwC, Grant Thornton, BDO, Mazars and EisnerAmper. These are auditors to all of the major listed companies, banks and insurers, and hundreds of other public interest entities in the State.

IAASA’s work has focused on certain risk areas within a sample of audits at each firm to ensure that they were carried out effectively.

Each audit will get a grading of between one and four (a score of four will signal that significant improvements are required). Firms will get 12 months to rectify any issues that are identified or face an investigation.

IAASA has the power to impose hefty fines on individuals and their firms for any failings. For individuals a penalty of up to €100,000 can be levied, and for a firm a fine of up to €100,000 per partner can be imposed. IAASA can also impose various other conditions on firms, and it can convene a panel of experts to conduct a disciplinary inquiry into individuals or firms.

The IAASA inspections have also looked at the structures, policies and controls within firms, and will produce colour-coded results for this element – yellow (minor deficiency), amber (improvement is required) and red (which will signal a significant deficiency).

The report will state how many audits were reviewed, list the grades for each of them and identify the issues that arose. However, it won’t identify the company whose audit was reviewed and where a failing was identified, nor will IAASA explicitly state if a firm is being investigated over a particular audit.

This increased oversight of auditors comes in the wake of the financial crisis which led to the demise of Anglo Irish Bank and Irish Nationwide at great expense to taxpayers, and Quinn Insurance being placed into administration by the Central Bank of Ireland.

IAASA began this latest piece of work in late 2016 but did not publish the findings of its first round of inspections. Instead it gave the firms time to resolve any issues that arose before a second round of inspections was carried out, which will be the subject of the report next year.

Similar regimes are already in place in the UK and the United States, and IAASA reviewed policies in 25 European countries before establishing its own system. It is understood that IAASA plans to publish reports on an annual basis.

Based in Naas, Co Kildare, IAASA is responsible for the inspection of statutory audits by large firms of public interest entities, and for monitoring professional accountancy bodies and their members.