Taking the taxing out of claiming your tax back 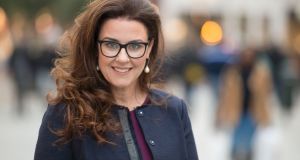 Anyone who has worked abroad, even for a summer on a J1 visa, is well aware of the dystopian nightmare that the chore of filing unfamiliar tax returns can quickly become.

When Terry Clune returned from a summer in Germany back in the 1990s, he figured he might be entitled to a refund. Having cracked how to do it, the Trinity student found himself in demand from fellow students. The seed of a business idea was born.

Taxback. com and its related companies have come a long way from that rudimentary business established in the kitchen of the family home. Its bread and butter is still advising clients on how to meet their tax obligations and how to ensure they get any reliefs they are due but it now employs close to 1,700 people in 27 countries.

Joanna Murphy is the person charged with pushing it even further. No stranger to the business, her links with Clune go back almost eight years to ConnectIreland, the not-for-profit job creation venture he established in the depths of the post-crash recession to persuade Irish people travelling abroad to tap into their network to encourage them to bring their companies to Ireland or grow their presence here.

A chance meeting at an airport escalator persuaded Murphy to sign on as a “connector”.

“I’m a mother of three children and, at that time, I remember being paralysed like lots of people were, worried about whether or not they would have any future in the country and whether they would be able to stay here and whether, as a mother, I’d be looking forward to saying goodbye to them at some point in the future.”

Having signed up, she succeeded in bringing one business to Ireland and eventually rose to become chief executive in the organisation.

When it was wound up in 2017, much to the chagrin of Clune, Murphy stuck with him, moving on to lead the Irish Diaspora Loan Fund, another Clune brainchild. Regulated by the Central Bank, it promotes Ireland for high networked individuals who would want residency status here in return for investment.

Last July, she took over at the helm of Taxback.com. Twenty-three years on from its founding, Taxback.com is just one of six companies in the Taxback group. Others deal with cash transfers or corporate tax filings in areas like VAT.

Taxback may be a grown-up business but it remains close to its backpacker roots.

And that, in part, was why it found itself embroiled in a battle with the Australian government over what it argued was a discriminatory tax law. At the start of 2017, Australia brought in what quickly became known as the backpacker’s tax. Where Australians were able to earn up to 18,000 local dollars before paying tax, temporary visiting workers were taxed at 15 per cent from the first Aussie dollar they earned.

When a British backpacker wanted to challenge the law, Taxback.com took on the case. In October, a federal court in Brisbane agreed that the tax was discriminatory – at least to citizens of eight countries with specific tax treaty measures guaranteeing equality with Australian workers.

The hope now is that the Australian tax authorities will accept the tax is now unworkable and change the law. At worst, that would mean Irish travellers would not be taxed on their work in Australia going forward. At best, the thousands of Irish backpackers who have lost out due to the tax since the start of 2017 will be in line for an unexpected refund.

With travellers from the eight countries directly affected accounting for more than half of all those visiting Australia on working holidays, Murphy is optimistic that common sense will prevail.

But while backpackers are etched in its DNA, Taxback has become much more. “The traditional Taxback.com model would be business to consumer based on tax refunds,” Murphy says. “That model has kind of moved now to a compliance piece that people, you know, due to the taxation policy internationally, that compliance piece is much greater than it would have been.”

The changing nature of work has also played a part. Portfolio work, the gig or sharing economy, whatever you want to call it means many people are earning in a different way than was traditionally the case, with sometimes multiple sources of income.

That complicates matters both for the worker and for the various employers as all this income has to be accounted for in some way. Taxback.com has already signed “ some very significant strategic partnerships with big players within the sharing economy, the gig economy”, Murphy says, and she sees potential for more.

Technology, too, has become central to how it operates. “One of the big areas of growth for us has been taking something that was a traditionally a manual process – tax returns – and we’ve automated that and built a platform around that. So, we have software as a service product that’s the Taxback product called Sprintax TDS [tax determination software],” says Murphy.

The company launched Sprintax in the United States two years ago, initially in the higher education sector where, Murphy says, universities were struggling to ensure that international students and visiting faculty were compliant with their obligations to file tax returns in the US at a time when they might have income in different jurisdictions. Now, she says, eight out of 10 of the top universities in the US now use its system.

“If you are an Irish student based in the United States and you’re working in a bar at night, because President Trump’s Tax and Jobs Act two years ago, from the very first dollar you earn, you must file a federal return,” Murphy advises.

“And that has massive implications beyond compliance. If they don’t file and they’re not compliant from a taxation perspective, it has massive knock-on effects in the future in terms of being able to re-enter the country. Students don’t think of that at the time.”

Taxback sells Sprintax codes to the universities, which then distribute them free to students. “If you click on the link, it’ll pull you right through to your federal return,” Murphy says. “Our software is intuitive, it recognises that your first language may not be English. It recognises that you’re not used to taxation, it simplifies it, makes it really easy and, at the end, you do your tax return.”

At the end of the process, it prompts the user not to forget about state returns which are required in most US states. “And that’s slightly interesting because 70 per cent of our clients from a student population that do a State return are entitled to a refund.”

Murphy says its software platform is unique. While US company TurboTax is the market leader in online tax filing for US residents, its system cannot deal with non-resident filings. It has partnered Sprintax in a move that is hugely beneficial for the Irish-owned business but also adds to its own offering.

“We’re at significant market share in terms of what’s available in the United States,” says Murphy. Now, they’re bringing the product to new markets. First is Canada but the company also has plans for Australia, Britain and beyond.

“I suppose the core in what we do is to understand that taxation is difficult and it’s arduous and to read through Revenue online, to try to figure out where you fit in is hard,” says Murphy. “It can be complicated, it can be daunting and we just try to simplify that and to make it as easy for our customers as possible.

“Our experience is that, for the most part actually, people overpay their tax. They just don’t know what’s available in terms of reliefs and allowances and when they should apply for tax or what’s allowable.”

Taxback is good on figures but it is remarkably coy when it comes to talking about its own performance. The company is unlimited, which means it is not obliged to file public accounts.

Murphy cites competitive advantage as the reason. What she will say is that the business is growing, hiring more people and scaling up at an accelerated rate on the back of the technology it has developed.

Even on the micro front, it is reluctant to indicate what an individual might pay to have the company process a return beyond saying that the business wouldn’t exist “if it wasn’t extremely cost competitive, and in the most part our clients are due a refund”.

We’re speaking as the furore over comments by TD Noel Grealish about remittances continues to swirl in the Oireachtas and across public forums. Murphy is wary, unsurprisingly, of getting involved publicly in a slanging match over what is an increasingly emotive issue.

“As an Irish company first and foremost but also an international multinational company, we’re very well aware of our own footprint and the four corners of the earth that the Irish have taken to,” she says. “And a lot of international companies welcome those Irish with open arms. We are very encouraging of having access to talent.

“Our experience here has been that, by employing people that have these varied experiences, it makes us stronger; it keeps our culture fresh, our own internal corporate culture fresh. It’s very important to be open to that.

“We would never have been able to access the various countries and nationalities without that. So, from our point of view inclusivity, even from the point of view of gender balance, a predominantly female workforce here and we try to facilitate.”

Unusually for a financial services business, Murphy says Taxback has a predominantly female workforce and works hard to find ways to facilitate those who are ambitious and productive.

“Obviously, there can be challenges, particularly from a female perspective in terms of work/life balance and all of that but we try very hard to try to answer that,” she says.

And how does she manage work/life balance?

“I have a lot of energy and you need it, particularly when you’re raising a family at the same time, you know,” she says. “ I worked every day of my life since I was 14 years of age. I’ve never stopped working.”

Initially that was alongside her studies as she pursued a business degree before going into the construction supply sector. Then she decided to branch out on her own.

“I was working for an organisation at the time and they were involved in construction supply. Things went a little sour and I decided I’d start up in competition. And the rest, as they say, is history.”

Among other things, that means she never had the chance to experience the adventure of gap years and backpacking that still form an important part of the business she runs.

“I didn’t know it [the gap year phenomenon] existed to be honest.”

Name: Joanna Murphy
Age: 45
Job: Chief executive of Taxback.com
Lives: In the Wicklow village of Hollywood, where she grew up
Family: Married to Raymond with three children
Something you might expect: She spends a lot of time travelling
Something that might surprise: Joanna’s first business was far removed from travel and tax advisory work – in construction supply

1 Brother is dragging his heels as executor of uncle’s will - is there anything I can do?
2 Irish whiskey sales near milestone of 12m cases a year
3 Should my mam wait for house prices to drop before buying?
4 Apple tax case: Four individual lawyers paid over €500,000 each
5 Covid-19 mortgage breaks: What’s the catch?
6 Pinterest seeks new office for Dublin EMEA headquarters expansion
7 Stocktake: Has Warren Buffett lost the magic touch?
8 ‘I have a talent for justifying purchases’
9 Denis O’Brien forced to lift hood on Digicel in debt restructuring
10 Hangover for the drinks sector as pint sales go flat
Real news has value SUBSCRIBE