Negative interest rates for Irish depositors are on the way, says German bank 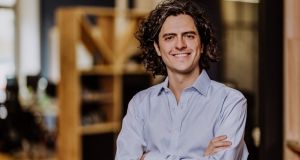 Alejandro McCormack, Raisin’s business developer manager for the Irish market: ‘Our ambition here over next year is to have more banks on the platform and I think we could get up to between 12 to 14 in that time.’

Irish lenders will inevitably start charging negative interest rates on deposits for retail customers, according to the head of the Irish unit of German fintech Raisin.

The Berlin-based group, which operates a pan-European deposits platform, said that with Irish retail banks being charged heavy sums for deposits kept with the Central Bank of Ireland, they would have soon little choice but to follow lenders in other countries by passing on the cost to consumers.

Some banks across Europe, including in Ireland, are already passing on negative rates to corporate clients but many have been reluctant to do the same with retail customers. This is changing, however, with more lenders at least charging for new savers with large deposits.

Volksbank Fürstenfeldbruck, a co-operative bank, this month became the first lender in Germany to pass on the cost to customers with small deposits as well.

“In other countries there are negative rates and I think that this will be the next topic here,” said Mr McCormack.

Raisin launched on a digital-only basis in the Republic earlier this year. It is looking to capture a slice of the €100 billion Irish deposits market by offering market-beating rates to savers.

“None of them [the banks] want to be the first to do it but I think once one of them takes the plunge – which they will have to do – then the others will be quick to follow,” Mr McCormack said.

“The reason why the banks will have to do it is that it that they are basically paying a penalty for keeping deposits with the Central Bank and paid about €84 million last year to do so,” he added.

Raisin’s platform acts as a marketplace for deposit rates and allows savers to shop around a host of European banks for the best rates. It currently has four banks offering products here with several going live shortly, including Latvia’s Blueorange bank, France’s Younited and Portugal’s Banco Portugues de Gestao.

Another partner bank, Banca FarmaFactoring, recently announced plans to raise its one-year rate for new lenders to 0.70 per cent, one of the highest on offer here.

“Our ambition here over next year is to have more banks on the platform and I think we could get up to between 12 to 14 in that time. If you assume they have five products each then that will mean a significant number of new products for Irish consumers,” Mr McCormack said.

“We’ve seen a large number of registrations later and the take-up rate is much higher than in other markets when we’re launched which is noteworthy given how small the market is in Ireland and that we didn’t come out with really strong rates from our partners.”

Since its launch in 2013, the Raisin platform has accumulated some €17.5 billion in deposits, and currently works with nearly 90 partner banks across Europe. These include the German GEFA Bank, which is part of Société Générale. AIB also offers deposits to German savers through Raisin’s German marketplace, weltsparen.de.

“A low rate environment is difficult for everyone but it presents an opportunity for us because our partner banks can offer rates that are higher than you typically find in Ireland. That might not mean much on a small deposit of say €5,000 but can make a big difference if you’ve €70,000 in savings,” Mr McCormack said.

1 Could your old car be giving away all your secrets to its new owner?
2 Charting the stock markets: does technical analysis work?
3 Stocktake: Playing poker with the day traders
4 Artists need to put a stop to the firehose of ‘free’
5 Help, I’ve no PRSI stamps – can I still get a pension?
6 ‘I sometimes wonder if New Yorkers know how to relax’
7 CRH to proceed with $3.5bn acquisition of US cement maker Ash Grove
8 Albion profits fall
9 He’s almost 82 but Larry Goodman has plenty of moves left
10 Panama Papers: The secret offshore world of the elite
Real news has value SUBSCRIBE