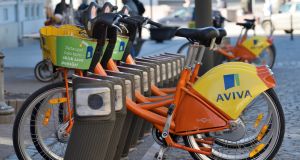 Nick Amin will take over the leadership of Aviva Ireland’s general insurance business up to the beginning of summer 2020, a spokeswoman for the insurer said. Photograph: iStock

Aviva Ireland’s general insurance chief executive John Quinlan is “on leave” from his role and a senior executive from the insurer’s UK parent has been parachuted in to take on his duties, according to the company.

“John Quinlan, CEO of Aviva Ireland General Insurance, is on leave and Nick Amin will take over the leadership of the general insurance business up to the beginning of summer 2020, subject to regulatory approval,” a spokeswoman for the insurer said in a statement provided to The Irish Times in response to questions.

It is understood that the development took place in recent weeks.

Mr Quinlan (55) joined Aviva Ireland as general insurance managing director in 2013 from RSA Insurance Ireland, where he was sales and marketing director. He was named chief executive of Aviva Ireland in November 2016, becoming its seventh head in a decade.

However, the business was reorganised in September to align itself with the structures of the wider Aviva group in the UK. This eliminated the position of Aviva Ireland chief executive and left Mr Quinlan in charge of the general insurance business.

Mr Amin, the senior group executive sent to Ireland to take over Mr Quinlan’s duties on an interim basis, joined the UK insurance group in 2013 and played a pivotal role in seeing through a major restructuring plan that was running at the time. It included the culling of 2,000 jobs.

Aviva had announced in September that Mr Amin was moving on from his current role as group chief operations and IT officer to support a strategic review of its business in Asia.

Aviva Ireland’s operating profit rose 15 per cent last year to €113 million, boosted by the Friends First deal, which increased its share of the State’s life and pensions market to about 15 per cent – roughly equating to its slice of the general insurance market.

London-based Aviva’s new chief executive, Maurice Tulloch, who took the helm in March after previous incumbent Mark Wilson was ousted late last year, unveiled a strategic overhaul on Wednesday, centred on a restructuring the group into five divisions and sale of its stake in its Hong Kong joint venture, called Blue.

The market was underwhelmed by the plan, resulting in Aviva’s stock falling by as much as 4.4 per cent during trading in London.

Analysts had speculated that Aviva might announce that it would sell smaller European operations such as France or Italy to focus on the UK, or offload books of life insurance that are closed to new customers.

1 Air travel never going ‘back to way it was’
2 Bank of Ireland sees more than 1,400 staff apply for redundancy
3 Should I switch bank now with Ulster Bank at risk of closing?
4 BoI redundancies, ‘tax war’ warning for Ireland, and retailers in rent arrears
5 Coronavirus vaccine: 15 billion doses needed to inoculate the planet
6 South Dublin land at €19m has scope for up to 500 homes
7 Hostelworld chief financial officer TJ Kelly to step down
8 O’Flynn Group in bid to build 1,137 homes on Dublin’s Naas Road
9 Will brother’s widow get half of our parents’ estate when they die?
10 Dalata hotel chief: ‘For 2020, it’s about how you survive’
Real news has value SUBSCRIBE