US bank can use tech to serve customers better and more cheaply, says Mike Corbat 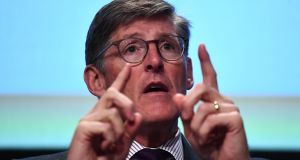 Citigroup chief executive Mike Corbatsaid that the “30 most common customer journeys”, such as ordering replacement bank cards and asking about statements, were “pretty easy to deal with”. Photo: Clodagh Kilcoyne

Citigroup chief executive Mike Corbat has suggested that “tens of thousands” of people working in the US bank’s call centres are likely to be replaced by machines that can “radically change or improve” customers’ experience while cutting costs.

Under pressure to bring its cost base in line with peers, Citi executives have been upfront about the impact of technology on their 209,000-strong global workforce, including last summer’s warning that as many as half of the 20,000 operations staff in its investment bank could be supplanted by machines.

Mr Corbat’s latest comments are the most explicit the company has been on how the $8 billion (€7 billion) a year Citi spends on technology could transform its vast consumer bank, which serves 100 million customers across 19 markets.

“When you think of data, AI [artificial intelligence], raw digitisation of changing processes, we still have tens of thousands of people in call centres, and we know when we can digitise those processes we not only radically change or improve the customer experience, it costs less to provide,” he said.

He would not specify how many people Citi employed in call centre jobs or how many would be affected, but said that the “30 most common customer journeys”, such as ordering replacement bank cards and asking about statements, were “pretty easy to deal with”.

Other companies are already using AI in call centres – UK retailer Marks and Spencer has systems that can analyse voice commands in real time and direct queries to the right department, while Google is also developing software that uses open-ended questions to find the best answers for customers and cut waiting times.

Citi has no plans to get rid of humans in its call centres altogether though. “There’ll always be the kind of thing where you’ve actually got to have someone to help solve,” said Mr Corbat. “We don’t want people frustrated in that.”

Mr Corbat cited the potential of Citi’s technology as one of the reasons that his bank would not take part in the wave of US retail banking mergers that some analysts expect to be kicked off after BB&T and SunTrust unveiled the sector’s biggest post-crisis merger a fortnight ago.