Ross has not sought access to consultancy report on Bus Éireann

Taoiseach urges unions and management to engage in constructive talks 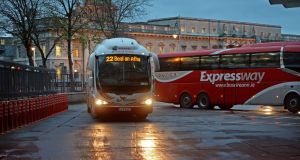 There are indications that Bus Éireann could discontinue operating some of its existing Expressway services. Photograph: Eric Luke

Minister for Transport Shane Ross has not sought access to a controversial consultancy report which recommends that Bus Éireann should close down its loss-making Expressway service.

A spokeswoman for the Minister said on Tuesday that the Grant Thornton report on options available to Bus Éireann for tackling its serious financial difficulties was “an internal company document”.

Opposition deputies in the Dáil on Tuesday greeted with derision a comment from Taoiseach Enda Kenny who said that Mr Ross had not received the Grant Thornton report and not had sight of its findings. Details of the Grant Thornton document were reported in The Irish Times a week ago.

The Taoiseach said he hoped trade unions and management at Bus Éireann would “engage in realistic and constructive discussions” about the serious challenges facing the State-owned bus company.

“I understand that the commercial arm of Bus Éireann – Expressway – loses approximately €6 million per annum. These losses threaten the company as a whole. It is important to note that these losses are not as a result of Government funding,” he said.

Mr Kenny said the problem being experienced by Bus Éireann was commercial rather than policy-related. He said it required a commercial response.

Mr Ross had told the Cabinet on Tuesday that he would ensure that rural communities would continue to have public transport connectivity despite indications that Bus Éireann could discontinue operating some of its existing Expressway services.

The Minister said he wanted to give management and unions space to resolve difficulties between them. The company is expected to write to trade unions on Wednesday seeking talks on the next phase of an overall cost-containment plan aimed at stabilising its financial position.

Bus Éireann has warned that its financial position is precarious, largely as a result of losses generated by its commercial Expressway inter-city services which do not receive any State subsidies and which are facing strong competition from private operators.

The next phase of the cost containment plan, which the company wants to discuss with unions, is likely to examine some existing staff premium payments and overtime rates.

The Department of Transport said on Tuesday that in agreement with the Minister, the National Transport Authority would be available to brief members of the Oireachtas on its approach to licensing of bus services and “the steps that can be taken to address service requirements on Expressway routes, if changes occur”.